Balin is a fictional character in J. R. R. Tolkien's legendarium. He is an important supporting character in The Hobbit, and is mentioned in The Fellowship of the Ring.

Balin was born in Erebor the son of Fundin. In the year Balin turned seven, Erebor was sacked by Smaug, and the Dwarves went into exile. During that period his younger brother Dwalin was born. Their father Fundin was killed in the Battle of Azanulbizar. Balin and his brother settled in the Blue Mountains with their surviving family. Balin and Dwalin were among those who set out with Thráin II in an attempt to return to Erebor, but they lost Thráin under the eaves of Mirkwood. After many days of fruitless searching they returned to the Blue Mountains.

Balin was a dwarf member of Thorin Oakenshield's company of dwarves who travelled with Bilbo Baggins and Gandalf in the Quest of Erebor, on which the plot of The Hobbit centres. The second dwarf to arrive at Bilbo's house at the beginning of The Hobbit, preceded by his brother Dwalin, Balin was part of the company assembled by Thorin to kill the dragon Smaug and to retake the mountain kingdom of Erebor. Like his brother Dwalin, he played a viol. Other than Thorin, he was the only one who had been at the Mountain before the dragon came. He had been 7 years old while Thorin had been 24 on that day, making him the second-eldest of the Dwarves.

Tolkien describes Balin as "their look-out man": he spotted Bilbo approaching the Green Dragon Inn at Bywater, saw the trolls' fire in the Trollshaws, and was the first to see the elves in Mirkwood. After they escaped the goblins in the Misty Mountains, Balin as look-out for the company failed to notice Bilbo (made invisible by wearing the One Ring), and after this incident he came to respect Bilbo's abilities as a burglar. Balin served as the de facto spokesman for the party after the Elvenking captured the dwarves, as they did not at first realise that Thorin had been imprisoned with them as well.

In the course of the Quest, Balin was the Dwarf who developed the closest friendship with Bilbo. He was the only one who volunteered to accompany Bilbo down the secret Erebor passage to Smaug. Some years after the Quest, he and Gandalf visited Bilbo in Bag End, where Balin told of the mountain's glory restored in the years after the Battle of the Five Armies.

The Lord of the Rings 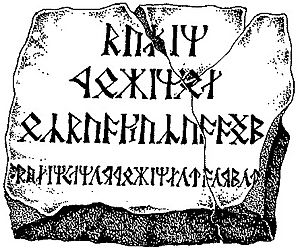 An artist's rendition of Balin's tomb. The inscription means "Balin Son of Fundin, Lord of Moria".

In The Fellowship of the Ring, Gloin tells the Council of Elrond that Balin had left Erebor and ventured to reclaim Moria with a company of dwarves including Óin and Ori (two of his companions from the Quest of Erebor), and Flói, Frár, Lóni, and Náli. The fate of Balin's colony was uncertain, as no word had come from Moria in many a year. The Fellowship later came upon Balin's tomb in the Chamber of Mazarbul, and learnt of his fate from the dwarves' book of records, the Book of Mazarbul. It told how Balin discovered Durin's Axe, and established a small colony, but it was overrun by orcs and Balin was killed by an orc archer in Dimrill Dale. Thus he died in the same place as his father, having been self-proclaimed Lord of Moria for less than 5 years. Balin's tomb was inscribed "Balin Fundinul Uzbad Khazad-Dûmu", with smaller runes beneath giving the translation into English (as the representation of Westron): "Balin, son of Fundin, Lord of Moria". 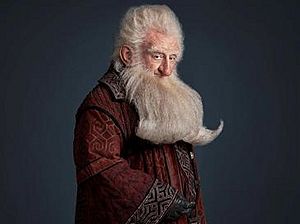 Don Messick voiced Balin in the 1977 animated version of The Hobbit.

In Jackson's adaptation of The Hobbit, Balin is portrayed by Ken Stott as reluctant to go on the quest for old gold, whether or not the dragon had stolen it from his ancestors, and as such sympathetic to Bilbo who appears quite unsuitable for the task he is being given.

In the 2003 video game adaptation Balin is voiced by Victor Raider-Wexler.

This list identifies each item's location in Tolkien's writings.

All content from Kiddle encyclopedia articles (including the article images and facts) can be freely used under Attribution-ShareAlike license, unless stated otherwise. Cite this article:
Balin (Middle-earth) Facts for Kids. Kiddle Encyclopedia.