Ballybeg Priory (Prióireacht an Bhaile Bhig in Irish) is a 13th-century priory situated near the town of Buttevant, County Cork, Ireland. 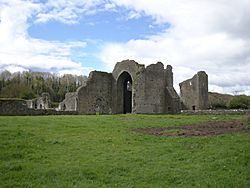 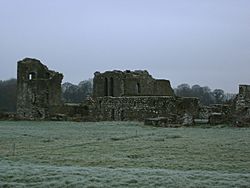 Philip de Barry founded the priory of St. Thomas Becket at Ballybeg for the Canons Regular of St. Augustine in 1229. His grandson, David Óg de Barry, the first Baron Barry enlarged the revenues of the priory in 1251. Ballybeg was an extensive foundation, the priory church measuring some 166 feet (51 m) in length and 26 feet (7.9 m) in width. The cloister, situated on the south side of the church was 90 feet (27 m) square.

The priory complex also incorporated a substantial gatehouse as well as columbarium, the inside walls of which are built in square compartments in regular tiers to a height of fifteen feet. There are some three hundred and fifty two niches, divided into eleven tiers each containing thirty-two compartments. The tiers begin above ground level so as to allow for the collection of droppings and end well below the flight hole in the roof since doves will not perch near busily frequented exits. The columbarium at Ballybeg, is typically located away from the main priory buildings, and still conserves a string course around the circumference of the building which served not only as a structural strengthening of the building but also to prevent weasels, martens or other vermin from scaling the walls to the entrances. The columbarium's importance stemmed from its having been a source of revenue for the priory as its principal agricultural purpose was the production of fertiliser. Pigeon fertiliser (guano) was essential for herb gardens and economically more highly valued than equivalents produced by cattle, sheep or pigs. It was also a sine qua non for the successful growing of hemp which was widely used for cloth, rope and sack making. An example of the economic importance attached to pigeon guano may be gauged from the miniature for the month of February, painted by the Limburg brothers in 1416, in the Très Riches Heures du Duc de Berry, presently conserved at Chantilly, in the Musée Condé (Ms 65).

Since pigeons could themselves be regarded as vermin and capable of wreaking damage on grain crops, columbaria were strictly controlled by medieval law. While tenants and others were permitted to keep a few pairs of doves in their roof-attics, a dovecot, such as that at Ballybeg, was the exclusive prerogative of the landowner who, in turn, was restricted to one nest per arpent, a medieval French measure of land of about an acre and a quarter. From this, we can infer that at the time of the construction of the dovecot at Ballybeg, the priory owned something in the region of four hundred and 40 acres (160,000 m2) of land or four carucates. At the time of its dissolution, Ballybeg seems to have been in possession of less than two carucates of land which would have been insufficient to justify maintenance of a dovecote of such large dimensions.

In its original charter, Bridgetown Abbey, another house of the Augustinian Canons, founded by Alexander Fitz Hugh de Roche ante 1216, on the other hand, was allotted 13 carucates or one thousand five hundred and 60 acres (240,000 m2), fish ponds, a third of the founder's mill, and the ecclesiastical benefices of his demesne. It does not appear to have had a dovecot or at least nothing has survived to indicate that it did.

By comparing the Ballybeg dovecot with other surviving examples in Ireland, it is possible to gauge the importance of the priory in relation to other contemporary religious houses: the dovecot attached to the Trinitarian priory in Adare, County Limerick, for example, is much smaller, indicating a religious house of proportions a good deal more modest than those of Ballybeg. In France, the medieval ordinances concerning dovecots were only abolished in 1789.

Another indication of the priory's importance is the remains of a fish-pond. As with dovecots, fish-ponds were reserved to landowners. The typical fresh-water fish-pond in Norman Ireland would have been stocked with European perch, roach, bream, tench, and pike (regarded as great delicacy), and later with carp. An excellent example of a monastic fishpond, in use since medieval times, is that of the Benedictine Abbey of Kremsmünster in Upper Austria.

Unlike other manors, however, the priory of Ballybeg does not appear to have had an enclosure for deer.

Like its Bridgetown counterpart, Ballybeg, in which the de Roches also had a part in its foundation and endowment, was probably held from the de Barrys in frankalmoign and included rights such as gallows and baronial courts for all contentious issues and pleas arising on the abbey's domain among its tenants and bondsmen, excepting those reserved to the crown. Alexander fitz Hugh de la Roche enfeoffed his nephew Maurice le Fleming with the western part of Fermoy. This Maurice le Fleming gave two carucates of land for the foundation of Bridgetown Abbey, while his grandson William Fitz Richard de Barry, granted the church of Cahirduggan to the Priory of Ballybeg by charter perfected on 28 September 1273.

By the time of the priory's suppression tempore Henry VIII, the endowments of this house amounted to a demesne of some 60 acres (240,000 m2) of arable land, 40 of pasture together with the priory buildings, church and cemetery. The priory also possessed 120 acres (0.49 km2) of land in the townsland of Ballybeg and the following appropriated rectories: Ballybeg, Kilkeran, Ardosoyll and Rathbarry, Ballycloghie and Ballycastell, Drusmallyny in McWilliam country, Carryketwohill, Castleheghan, Kilcoryhin, Kilmallaghe, Rossaghe, Downeraghill and Caherdowgan. All of these, with the exception of Drusmallyny (the modern Crossmolina in County Mayo) were to be found in the territories of Olethan and Muscrydonegan, the ancient cantreds conquered by the Barrys. In the confiscations tempore Elizabeth I, the property of the priory of Ballybeg passed into the hands of the Master of Ordinance, Sir George Bouchier. In the reign of James I, the patentees of the property of the Austine Canons of Ballybeg were Elizabeth Norreys, daughter of the Lord President of Munster Thomas Norreys, Sir John Jephson and Sir David Norton. In the Cromwellian period, John Norcote was sent by the Commonwealth to be minister at Mallow. His son, William, came into the possessions of the Priory in the last quarter of the seventeenth century and was registered as owner of the townslands of Lagg, Ballybeg and Old Grange. The last recorded titular Prior of Ballybeg was John Baptist Sleyne (1635–1712), Bishop of Cork and Cloyne, who died in exile at Lisbon. "To-day, oxen and asses rest and ruminate under the shadow of the church of the Austins of Ballybeg, the stone coffins of the monks their watering troughs, and the tombs where rest the bones of abbots their byres".

All content from Kiddle encyclopedia articles (including the article images and facts) can be freely used under Attribution-ShareAlike license, unless stated otherwise. Cite this article:
Ballybeg Priory Facts for Kids. Kiddle Encyclopedia.