Balmacara Bay is a remote wide mouthed embayment on a 193° orientation, located on the north shore of the Lochalsh peninsula, on the north coast of sea loch of Loch Alsh and is situated next to the scattered village of Balmacara in the Scottish Highlands in the west coast of Scotland.

The A87 road passed Balmacara and the bay, following the northern coast of Lochalsh. Balmacara Hotel, overlooking the Isle of Skye is located on Balmacara Bay. To the west of the bay is Kyle of Lochalsh and further west, heading north on the peninsula is Erbusaig Bay, to the east is Nostie Bay

Balmacara Bay is on the north shore of Loch Alsh. To the south of the bay, at about 1 km can be seen the opening of Kyle Rhea that separates the mainland of Scotland from the Isle of Skye, with Beinn na Caillich at 732metres to the right of the opening. Further to the east of the opening is the small hill of Glas Bheinn at 397metres. Further east again, and clearly visible from the bay, is the village of Ardintoul and Ardintoul Bay and Ardintoul point. 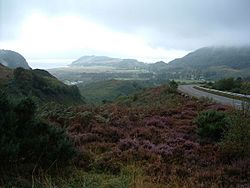 On the road to Auchtertyre

Auchtertyre Hill at 452m is the most imposing feature behind the bay. To the west of the bay, is the opening of the sea loch, Kyle Akin, which has a small number of islands, including Eileanan Dubha and Eilean Bàn which the A87 road to Kyle of Lochalsh travels over, although not visible from the bay. Slightly south of Kyle of Lochalsh is Kyleakin (Scottish Gaelic: Caol Acain) peninsula and the Rubha Àrd Treisis point, is the opening for the sea loch Loch na Beiste, which is visible from the bay. Behind and to the west of the bay, on the Lochalsh peninsula, is mostly flat.

The following images, detail the surrounding area, including the village of Balmacara, the bay, and those views from the bay.

All content from Kiddle encyclopedia articles (including the article images and facts) can be freely used under Attribution-ShareAlike license, unless stated otherwise. Cite this article:
Balmacara Bay Facts for Kids. Kiddle Encyclopedia.