Located off the Stillwater Avenue exit on Interstate 95, it serves as a shopping center for the surrounding Bangor area. Current stores include JCPenney and Dick's Sporting Goods. Previous anchors include Sears, which closed in 2018, Macy's (originally Filene's that opened in 1998), which closed in 2017 and became Furniture, Mattress And More in 2018, and Porteous, which closed in 2003 and became Dick's Sporting Goods in 2004. Bangor Mall is managed by Namdar Realty Group, who acquired the mall for $12.6 million in 2019 after Simon Property Group defaulted on an $80 million loan. 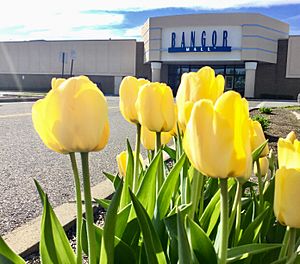 All content from Kiddle encyclopedia articles (including the article images and facts) can be freely used under Attribution-ShareAlike license, unless stated otherwise. Cite this article:
Bangor Mall Facts for Kids. Kiddle Encyclopedia.