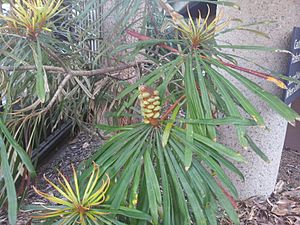 Banksia aquilonia, commonly known as the northern banksia and jingana, is a tree in the family Proteaceae and is endemic to north Queensland on Australia's northeastern coastline. With an average height of 8 m (26 ft), it has narrow glossy green leaves up to 20 cm (7.9 in) long and 6 to 10 cm (2.4 to 3.9 in) high pale yellow flower spikes, known as inflorescences, appearing in autumn. As the spikes age, their flowers fall off and they develop up to 50 follicles, each of which contains two seeds.

Alex George described the plant in his 1981 monograph of the genus Banksia as a variety of Banksia integrifolia, but later reclassified it as a separate species. Genetic studies show it to be related to Banksia plagiocarpa, Banksia oblongifolia and Banksia robur. The species is found in wet sclerophyll forest and rainforest margins on sandy soils. Banksia aquilonia regenerates after bushfire by regrowing from epicormic buds under its bark. It is rarely cultivated.

Field volunteers for The Banksia Atlas recorded plants with large adult and juvenile leaves up to 38 cm (15 in) long along the Tully to Mission Beach Road, and a population of smaller shrub-sized plants to 3 m (10 ft) high with small narrow leaves 13 cm (5.1 in) long and 0.4 cm (0.2 in) wide at Coronation Lookout in Wooroonooran National Park, plants with normal morphology occurring further down the mountain. 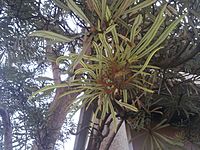 The undersides of the leaves have prominent furry midribs. 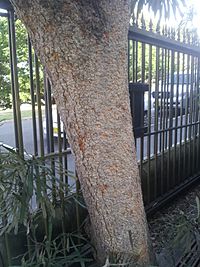 Banksia aquilonia was first described by Alex George in 1981 as a variety of Banksia integrifolia (coast banksia), from a specimen collected at Witts Lookout in Crystal Creek National Park south of Ingham on 12 April 1975. The species name is the Latin adjective aquilonius, meaning "northern", as it was the most northerly form of B. integrifolia. In 1996 Kevin Thiele and Pauline Ladiges published a cladistic analysis of Banksia based on morphology, in which this taxon stood out as the only member of B. integrifolia to be both morphologically and geographically distinct from other infraspecific taxa. They also noted that there were no intermediate plants between what was then known as B. integrifolia var. aquilonia and other populations of B. integrifolia. On this basis they would have liked to promote it to species rank, but did not because their inferred phylogeny suggested that this taxon arose from within B. integrifolia. They were unwilling to render B. integrifolia paraphyletic by elevating this taxon to species rank, and they were equally unwilling to elevate all four varieties to species rank, since the others all had significant overlaps in distribution and morphology. Therefore, they simply promoted all four to subspecies rank. This example has since been held up as an interesting case study on how the concept of species should be defined, as it presents the problem of "a monophyletic group comprising a paraphyletic basal group of incompletely differentiated geographic forms within which is nested at least one divergent, autapomorphic taxon that invites treatment as a species."

George promoted it to species rank on the basis of its distinctive leaf arrangement and midrib in 1996. Thus its full name with author citation is "Banksia aquilonia (A.S.George) A.S.George". It is placed in subgenus Banksia, section Banksia and series Salicinae. Its placement within Banksia may be summarised as follows:

Despite initially assigning Banksia aquilonia to be variety of B. integrifolia, George noted that it had affinities with the then newly described species Banksia plagiocarpa, with which it co-occurs on and near Hinchinbrook Island in north Queensland.

Since 1998, American botanist Austin Mast and co-authors have been publishing results of ongoing cladistic analyses of DNA sequence data for Banksia and Dryandra. Their analyses suggest a phylogeny that differs greatly from George's taxonomic arrangement. Banksia aquilonia formed a clade with B. plagiocarpa, B. oblongifolia and B. robur, rather than B. integrifolia. Early in 2007, Mast and Thiele rearranged the genus Banksia by merging Dryandra into it, and published B. subg. Spathulatae for the taxa having spoon-shaped cotyledons; thus B. subg. Banksia was redefined as encompassing taxa lacking spoon-shaped cotyledons. They foreshadowed publishing a full arrangement once DNA sampling of Dryandra was complete; in the meantime, if Mast and Thiele's nomenclatural changes are taken as an interim arrangement, then B. aquilonia is placed in B. subg. Spathulatae.

Common names include northern banksia, white banksia, honeysuckle or white bottlebrush. A local aboriginal name is jingana, in the Jirrbal and Girramay languages. 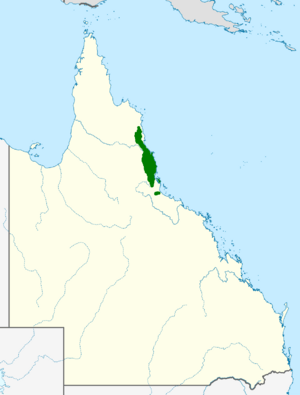 Banksia aquilonia occurs in coastal areas of northern Queensland from the Cedar Bay National Park to Paluma Range National Park, in areas with an annual rainfall of 1,000 to 4,000 mm (39 to 157 in). It occurs from near sea level to an altitude of 1,000 m (3,300 ft), in a variety of habitats and aspects. It grows in wet sclerophyll forest or rainforest margins, on plateaus, ridges, slopes and low-lying swampy areas on sandy or rocky soils, generally of granitic origin, or sometimes clay. It commonly grows with tree species such as the pink bloodwood (Corymbia intermedia), forest red gum (Eucalyptus tereticornis), swamp turpentine (Lophostemon suaveolens), forest oak (Allocasuarina torulosa), and black sheoak (A. littoralis), and understorey species such as coin spot wattle (Acacia cincinnata) and yellow wattle (A. flavescens). Much of its lowland habitat in the Wet Tropics has been degraded or fragmented. Although the range overlaps with B. dentata, the two species are not known to occur together.

Banksia inflorescences are energy-rich sources of food, and B. aquilonia nectar is a likely food item of the endangered mahogany glider (Petaurus gracilis), as well as many other mammals and birds. Avian species observed visiting the flower spikes include the bridled honeyeater, white-cheeked honeyeater, eastern spinebill and rainbow lorikeet.

Banksia aquilonia adapts readily to cultivation in humid or temperate climates, but is rarely cultivated. A fast-growing plant, it can grow in acidic soils from pH 3.5 to 6.5. Propagation is generally by seed, and plants flower at four to six years of age. Vegetative propagation is possible from semi-hardened cuttings of pencil thickness. The flower spikes attract birds to the garden. It can also be grown in a pot, with its branches heavily pruned to keep foliage dense.

All content from Kiddle encyclopedia articles (including the article images and facts) can be freely used under Attribution-ShareAlike license, unless stated otherwise. Cite this article:
Banksia aquilonia Facts for Kids. Kiddle Encyclopedia.