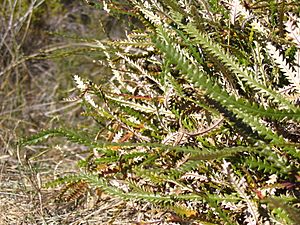 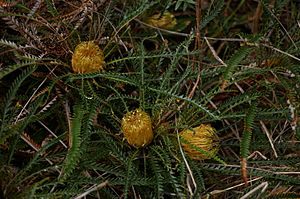 Banksia nivea, commonly known as honeypot dryandra, is a species of rounded shrub that is endemic to Western Australia. The Noongar peoples know the plant as bulgalla. It has linear, pinnatipartite leaves with triangular lobes, heads of cream-coloured and orange or red flowers and glabrous, egg-shaped follicles.

Banksia nivea was first collected by Jacques Labillardière in the vicinity of Esperance Bay between 15 and 17 December 1792, during a search for the naturalist Claude Riche, who had become lost on the Australian mainland. Labillardière formally described and figured the species in Relation du Voyage à la Recherche de la Pérouse, his account of the voyage published in 1800.

In 1810 Robert Brown transferred it into a new genus, Dryandra as D. nivea.

In 2007 Austin Mast and Kevin Thiele transferred all Dryandra species into Banksia, reinstating Labillardière's Banksia nivea and renaming the two subspecies B. nivea Labill. subsp. nivea and B. nivea (A.S.George) A.R.Mast & K.R.Thiele subsp. uliginosa, the names accepted by the Australian Plant Census. A third subspecies (B. nivea subsp. Morangup (M.Pieroni 9/42) WA Herbarium) has been named but not yet formally described.

Honeypot dryandra is widespread between Lake Indoon (near Eneabba), Ongerup and Israelite Bay. Subspecies nivea grows in woodland and kwongan Subspecies uliginosa has a narrow distribution from east of Busselton and on the Scott River plain where it grows in thick scrub.

All content from Kiddle encyclopedia articles (including the article images and facts) can be freely used under Attribution-ShareAlike license, unless stated otherwise. Cite this article:
Banksia nivea Facts for Kids. Kiddle Encyclopedia.