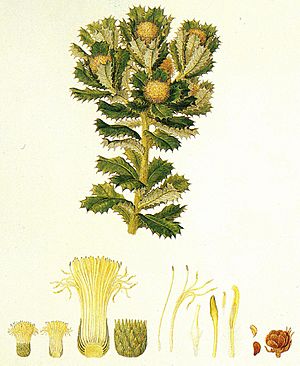 A painting of B. sessilis var. sessilis by Ferdinand Bauer

As the autonymous variety, B. sessilis var. sessilis encompasses the type material of the species; thus collections of this variety date back to the 1791 visit of Archibald Menzies to King George Sound. However the autonym was not needed until 1996, when Alex George published the other three varieties. As this taxon was then placed within the genus Dryandra, this varieties name was then Dryandra sessilis var. sessilis. It was transferred to its current name in 2007, when Austin Mast and Kevin Thiele transferred Dryandra into Banksia.

B. sessilis var. sessilis occurs in a wide belt running from Regans Ford and Moora in the north, southeast to Collie and Bremer Bay.

It is a hardy plant that tolerates a wide range of soils and conditions, including drought and moderate frost. It flowers heavily, and produces an abundance of honey. However it is too large for smaller gardens, and in suitable conditions can produce many seedlings.

All content from Kiddle encyclopedia articles (including the article images and facts) can be freely used under Attribution-ShareAlike license, unless stated otherwise. Cite this article:
Banksia sessilis var. sessilis Facts for Kids. Kiddle Encyclopedia.