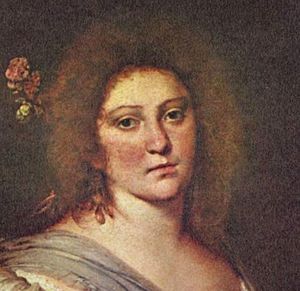 Gambenspielerin (The Viola da Gamba Player), c. 1630–1640, (Gemäldegalerie, Dresden) by Bernardo Strozzi, believed to be of Barbara Strozzi. It is unclear whether the painter is immediately related to the Strozzi family.

Barbara Strozzi (also called Barbara Valle; baptised 6 August 1619  – 11 November 1677) was an Italian singer and composer of the Baroque Period. During her lifetime, Strozzi published eight volumes of her own music, having more music in print than any other composer of the era. This was made possible without any support from the Church or consistent patronage of the nobility.

Strozzi's life and career has been overshadowed by the claims of her being a courtesan, which cannot be completely confirmed as at the time female music making was often assumed to be an intellectual asset of a courtesan.

All content from Kiddle encyclopedia articles (including the article images and facts) can be freely used under Attribution-ShareAlike license, unless stated otherwise. Cite this article:
Barbara Strozzi Facts for Kids. Kiddle Encyclopedia.