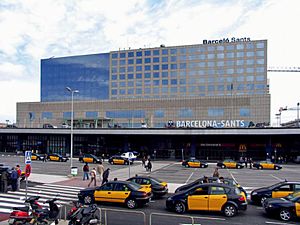 Barcelona Sants (also Estació de Sants) is the main railway station in Barcelona, operated by RENFE. Built in the 1970s, the current station has become Barcelona's most important transport centre. The station is named after Sants, the neighbourhood of Barcelona that it is in.

The station has recently been remodeled to accommodate the Spanish high-speed train AVE, which began service on 20 February 2008.

The station is in the Sants-Montjuïc district of Barcelona, northwest of the city centre. It is easily reached by metro or bus from anywhere in the city. The station has two entrances.

The station has been built in a modern airport style. All its platforms are underground. The current redevelopment is aimed to make the surface-level entrance and ticket-hall area larger and brighter. A four-star hotel (Hotel Barceló Sants) occupies most of the upper floors of the station's main building. There is also an adjacent international bus station also called Barcelona Sants.

All content from Kiddle encyclopedia articles (including the article images and facts) can be freely used under Attribution-ShareAlike license, unless stated otherwise. Cite this article:
Barcelona Sants railway station Facts for Kids. Kiddle Encyclopedia.