As part of a consortium, the Greater Wellington Regional Council purchased a 284.6 hectare property near the Baring Head lighthouse in June 2010 for addition to the East Harbour Regional Park. The purchase was made with financial contributions from the New Zealand Government's Nature Heritage Fund, Department of Conservation, Hutt City Council and a private benefactor. The purchase will protect a wide range of landscape, scientific, historical, ecological, cultural and recreational values. The area was opened to the general public on 13 February 2011.

A community group, the Friends of Baring Head, was formed in December 2010 to help the Regional Council in its management of the property.

Within the park is a set of natural rock formations which are used for rock climbing, specifically bouldering. Climbing website ClimbNZ describes this area as "the birthplace of bouldering in New Zealand" and list over 200 climbing routes on the rocks.

Following the work started in 1972 by Dave Lowe, Atmospheric carbon dioxide monitoring continues to be carried out at Baring Head. The Carbon Dioxide Information Analysis Center in the United States has a record of measurements from 1970 to 1993 and from 1977 to December 2007. 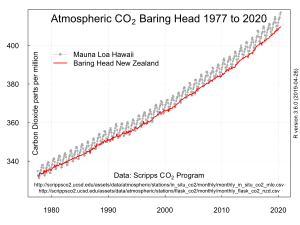 In the early‑1990s, Energy Direct (formerly the Hutt Valley Electric Power Board) applied for resource consents to build a what would have been the first wind farm in New Zealand. The Wellington Regional Council rejected the application and the applicant did not appeal. The site at that time was in private ownership.

All content from Kiddle encyclopedia articles (including the article images and facts) can be freely used under Attribution-ShareAlike license, unless stated otherwise. Cite this article:
Baring Head / Ōrua-pouanui Facts for Kids. Kiddle Encyclopedia.