Kids Encyclopedia Facts
This page is about the Barker Reservoir near Houston, Texas. For the reservoir near Nederland, Colorado, see Barker Meadow Reservoir.

Barker Reservoir is a flood control structure in Houston, Texas which prevents downstream flooding of Buffalo Bayou, the city's principal river. The reservoir operates in conjunction with Addicks Reservoir to the northeast, which impounds Mayde and Bear Creeks, two tributaries of the Buffalo. Both reservoirs were authorized under the Rivers and Harbors Act of June 20, 1938, which were modified by the Flood Control Acts of August 11, 1938; September 3, 1954; and October 27, 1965.

George Bush Park, operated by Harris County, is located entirely within the reservoir.

Houston annexed the Addicks area in 1972.

Barker Reservoir is southwest of the intersection of Interstate 10 and State Highway 6, about one mile (1.6 km) south of Addicks in western Harris County.

The Barker Dam and Reservoir is named for Eldred Barker (1775–1842), an early pioneer from Natchitoches Parish, Louisiana, whose 1839 Headright Grant comprises 320 acres of the site which was first surveyed on September 22, 1842. 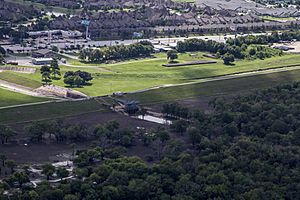 Aerial view of the Barker Reservoir spillway in 2016, looking southeast.

From 2008 to 2014, the U.S. Army Corps of Engineers Galveston District implemented $4.4 million in interim risk reduction measures (at Addicks and Barker dams) to address deficiencies until long-term solutions could be identified and executed. In 2014, staff completed a Dam Safety Modification Study to evaluate long-term repairs and address issues associated with the dams. Staff presented this information during a public meeting October 29 at Bear Creek Community Center in Houston to discuss these plans and gather feedback. Construction is scheduled to begin May 2015 with an estimated completion date of 2019.

It is estimated the Addicks and Barker Reservoirs, along with other federal construction projects on Buffalo Bayou and its tributaries, will prevent average annual flood damages of $16,372,000 to the city of Houston.

During and after Hurricane Harvey, 7,000 acres of private upstream land was submerged by floodwaters held back and controlled by the Addicks and Barker dams.A series of lawsuits were filed in the U.S. Court of Federal Claims (CFC) after this flooding. The CFC selected thirteen property owners to serve as tests cases in a bellwether trial to determine liability. The CFC also appointed attorneys Armistead Easterby, Daniel Charest, and Charles Irvine as Co-Lead Counsel for upstream plaintiffs.

Federal Claims Judge Charles Lettow presided over the May 2019 liability trial, which was held in Houston, Texas. On December 17, 2019, the CFC held that the upstream flooding constituted a Fifth Amendment taking.

All content from Kiddle encyclopedia articles (including the article images and facts) can be freely used under Attribution-ShareAlike license, unless stated otherwise. Cite this article:
Barker Reservoir Facts for Kids. Kiddle Encyclopedia.