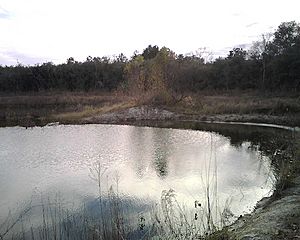 Northeastern section of the reservoir

The Addicks Reservoir and Addicks Dam in conjunction with the Barker Reservoir prevent downstream flooding of Buffalo Bayou in the City of Houston, Texas. Both reservoirs were authorized under the Rivers and Harbors Act of June 20, 1938, which was modified by the Flood Control Acts of August 11, 1938; September 3, 1954; and October 27, 1965. The U.S. Army Corps of Engineers completed construction of Addicks Dam and the outlet facility in 1948.

Addicks Reservoir is situated on the north side of Interstate 10. It extends slightly north of Clay Road, and between Barker-Cypress Road to the west and Sam Houston Tollway to the east. State Highway 6 bisects the reservoir north to south. In addition to the Reservoir's flood damage reduction mission, recreation and nature observation opportunities abound through the approximately 26,000 acres (105 km²) of land that makes up Addicks and Barker reservoirs, which are often dry wooded areas in normal times. The West Houston Airport is located within the western edge of the Addicks reservoir, between Barker-Cypress Road and State Highway 6.

Addicks Reservoir and Dam get their name from the former town of Addicks, Texas, named after its original postmaster, Henry Addicks.

From 2008 to 2014, the U.S. Army Corps of Engineers Galveston District implemented $4.4 million in interim risk reduction measures (at Addicks and Barker dams) to address deficiencies until long-term solutions could be identified and executed. In 2014, staff completed a Dam Safety Modification Study to evaluate long-term repairs and address issues associated with the dams. Staff presented this information during a public meeting Oct. 29 at Bear Creek Community Center in Houston to discuss these plans and gather feedback. Construction is scheduled to begin May 2015 with an estimated completion date of 2019.

On August 28, 2017, during flooding from Hurricane Harvey, the U.S. Army Corps of Engineers began controlled water releases at both the Addicks and Barker Reservoirs, in an attempt to manage flood levels in the immediate area. The waters continued to rise, and on August 29, after reaching pool elevation over 108 feet above NAVD 1988, the Addicks Reservoir began around the end of the dam near Tanner Rd. Flows less than 100 cubic feet per second were detected at the spillway. In the afternoon of August 29, 2017, the Army Corps of Engineers made the decision to raise the controlled release rates to 16,000 cubic feet per second. As of August 30, 2017, combined controlled discharge rates of Barker and Addicks were 13,700 cubic feet per second, and subdivisions surrounding the outlets and downstream past Beltway 8 experienced significantly increased flooding as Buffalo Bayou further overtopped its banks.

It is estimated the Addicks and Barker Reservoirs, along with other federal construction projects on Buffalo Bayou and its tributaries, prevent average annual flood damages of $16,372,000 to the city of Houston.

Several parks are scattered throughout the reservoir, including Bear Creek Pioneers Park along with hike/bike/horse trails. There is a paved bicycle trail going alongside the reservoir, with the trail head being located next to Sherwood Elementary School.

During and after Hurricane Harvey, 7,000 acres of private upstream land was submerged by floodwaters held back and controlled by the Addicks and Barker dams.A series of lawsuits were filed in the U.S. Court of Federal Claims (CFC) after this flooding. The CFC selected thirteen property owners to serve as tests cases in a bellwether trial to determine liability. The CFC also appointed attorneys Armistead Easterby, Daniel Charest, and Charles Irvine as Co-Lead Counsel for upstream plaintiffs.

Federal Claims Judge Charles Lettow presided over the May 2019 liability trial, which was held in Houston, Texas. On December 17, 2019, the CFC held that the upstream flooding constituted a Fifth Amendment taking.

All content from Kiddle encyclopedia articles (including the article images and facts) can be freely used under Attribution-ShareAlike license, unless stated otherwise. Cite this article:
Addicks Reservoir Facts for Kids. Kiddle Encyclopedia.