The Barlow Respiratory Hospital is a hospital located in the Elysian Park neighborhood of Echo Park, near Dodger Stadium in Los Angeles, California. The hospital operates satellite sites in Van Nuys, California and in Whittier, California.

The hospital serves an ethnically diverse population that mirrors the diversity of Los Angeles County. Eighty percent of patients are from Los Angeles County while the remaining 20% are admitted from surrounding counties, national and international medical facilities. Patients are primarily older, suffer from medically complex conditions and are admitted after hospitalization in ICU and when a longer hospital stay is needed before discharge to a non-hospital setting or home.

The hospital has four primary treatment programs. Through these programs, it is able to care for conditions that are often associated with respiratory diseases, thus promoting a holistic model of treatment.

Barlow TIPS protocol has been adopted as a standard of excellence in hospitals nationwide. The Barlow team of health care professional helps patients previously unable to be liberated or "weaned" from the ventilator at other hospitals. Patients are guided through a step-by-step method, implemented and monitored by respiratory care practitioners, to recover independent breathing.

Many patients entering the hospital have been bedridden for long periods of time. This often requires specialized care in order to treat the resulting bed wounds.

Barlow Respiratory Hospital CEO Amit Mohan announced a Master Plan to ReBuild Barlow. The multi-phased plan, which began in 2018, includes a major seismic upgrade and brings a long-planned hospital expansion and modernization project to fruition. Hospital structures built between 1902 and 1983 required seismic reinforcement and additional upgrades. The ReBuild Barlow project concludes the required major seismic retrofit and allows the hospital to continue to operate while a new hospital is being constructed.

Barlow has served as a teaching hospital for medical students at the Keck School of Medicine of USC and the David Geffen School of Medicine at UCLA and as a clinical training site for respiratory therapy, nursing, physical, occupational, speech therapy and clinical nutrition allied health professionals.

Walter Jarvis Barlow founded the Barlow Sanatorium in 1902. He received his MD degree in 1892 from Columbia University. Though he was born and raised in New York, he was forced to move west in search of a dry and sunny climate after contracting tuberculosis in 1895 and moved to Sierra Madre, California. The sanatorium was founded on 25 acres (10 ha) of meadowland next to the city-owned Elysian Park on Chavez Ravine Road. The location seemed ideal because the surrounding configuration of hills provided for clean air and the neighboring Elysian Park seemed to insure against any future development. The land was purchased for $7,300. Patients were housed in tent cottages that were constructed so that patients would have maximum exposure to fresh air and sunlight; at that time these elements were of primary importance in order to recover from tuberculosis. In the early days of the Barlow Sanatorium patients lived by strict rules; one document read:

Patients must not expectorate anywhere except in cups provided for that purpose. Cloths are to be used as handkerchiefs and burned morning and evening. Patients must not discuss their ailments or make unnecessary noise. Patients must not put anything hot on glass tables. Lights out at 9 p.m. Cold plunge every morning; hot baths Tuesday and Saturday. Patients are forbidden to throw water or refuse of any kind on the ground. When doctors think them able, every patient must do some work about the Sanatorium or go away. Patients disobeying these rules will be dismissed.

As the century continued, medical advances made tuberculosis a less serious threat in the United States. Because of this, the tuberculosis sanatorium shifted its focus towards chronic respiratory diseases and secondary related diseases.

The site was named a Los Angeles Historic-Cultural Monument in 1990.

Buildings on the campus 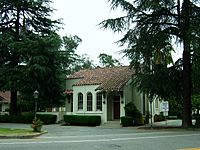 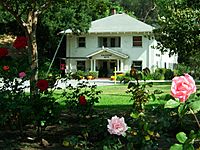 Barlow Respiratory Hospital maintains a 25-acre campus with cottages, a library, the main hospital, and a community hall. Old chicken coops are still standing on the outskirts of the campus. This layout can be attributed to the hospital's history as a tuberculosis sanatorium where patients lived for several years.

Cottages on the campus

Originally tuberculosis patients lived in tent cottages in order to be exposed to free flowing air. As time went on permanent cottages were added to the campus by donors. The architecture of the bungalows is in the California bungalow style. During World War I many servicemen contracted tuberculosis and were sent to the Barlow Sanatorium. Because of this the Los Angeles Chapter of the American Red Cross built and furnished four four-room cottages for military patients, some of which are still in use today.

Dedicated to the sanatorium on May 6, 1922, this stucco and red tiled library is still in use. It was paid for by the Los Angeles Optimists Club and has stained glass windows donated by James Slauson and a second by Mrs. Helena Torrance in memory of her husband, Jared Sidney Torrance. Jared Sidney Torrance had served on Barlow's Board of Trustees since 1910 as vice president and president. The library underwent renovations in 1992.

The Guildhouse was originally the "Men's Help" quarters, where the men working in the hospital would live. In 1975 the old building was converted into a gift and plant shop. This was funded by the Barlow Guild, a large group of ex-patients dedicated to philanthropy, and the Guildhouse opened in April of that year. The Guildhouse closed indefinitely in 2014.

In 1903, the original hospital of the Barlow Sanatorium was a permanent cottage with 13 rooms, two baths and 12 patient beds. It was built with donations from Mr. and Mrs. Alfred Solano, and was consequently named the Solano Infirmary. In September 1925, the Solano Infirmary burned down. In 1927 Alfred's wife, Mrs. Ella Brooks Solano, provided for the creation of a new infirmary, the Ella Brooks Solano Infirmary, a building that is still in use as the main hospital today. In 2018, the hospital announced a Master Plan to ReBuild Barlow including a seismic reinforcement of the existing historic facility. A new hospital will be built within the walls of an existing, adjacent hospital building.

All content from Kiddle encyclopedia articles (including the article images and facts) can be freely used under Attribution-ShareAlike license, unless stated otherwise. Cite this article:
Barlow Respiratory Hospital Facts for Kids. Kiddle Encyclopedia.