Kids Encyclopedia Facts
This page is about a castle. For the town of the same name in which it is situated, see Barnard Castle. 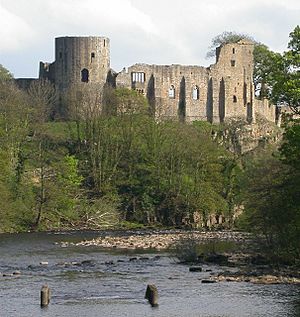 Barnard Castle above the River Tees 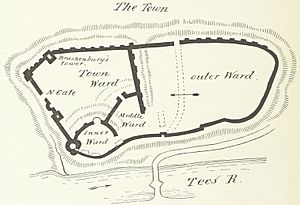 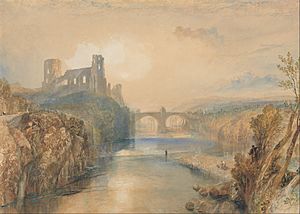 Barnard Castle is a ruined medieval castle situated in the town of the same name in County Durham.

A stone castle was built on the site of an earlier defended position from around 1095 to 1125 by Guy de Balliol. Between 1125 and 1185 his nephew Bernard de Balliol and his son Bernard II extended the building.

In 1216 the castle was besieged by Alexander II, King of Scotland. It was still held by the Balliol family although its ownership was disputed by the Bishops of Durham. When John Balliol was deposed as King of Scotland in 1296 the castle was passed to the Bishop of Durham. Around 1300 Edward I granted it to the Earl of Warwick. In the 15th century the castle passed by marriage to the Neville family. In 1477 during the Wars of the Roses, Richard, Duke of Gloucester (later Richard III) took possession of the castle, which became one of his favourite residences.

Over the next two centuries the Nevilles enlarged and improved the estate and created a substantial and impressive castle. During the Rising of the North, Sir George Bowes shut himself up in the castle, where he was besieged. Following the failure of the revolt, Charles Neville, 6th Earl of Westmorland was attainted for his leading role in the Rising of the North and the Neville estates were sequestered. In 1626 the Crown sold the castle and also the Neville property at Raby Castle to Sir Henry Vane.

Vane decided to make Raby his principal residence and Barnard Castle was abandoned and its contents and much of its masonry was removed for the maintenance and improvement of Raby.

The castle is in the custody of English Heritage and is open to the public. Of particular interest are the ruins of the 12th-century cylindrical tower and the 14th-century Great hall and Great chamber. It is a Scheduled Ancient Monument, and was designated as a Grade I listed building in 1950. The remains of the medieval chapel of St Margaret in the outer ward are listed as Grade II.

"Barney Castle" is a phrase in the dialect of County Durham meaning "a pathetic excuse", generally thought to derive from the incident when Bowes retreated into the castle. Eric Partridge included the phrase in A Dictionary of Slang and Unconventional English (1937).

All content from Kiddle encyclopedia articles (including the article images and facts) can be freely used under Attribution-ShareAlike license, unless stated otherwise. Cite this article:
Barnard Castle (castle) Facts for Kids. Kiddle Encyclopedia.