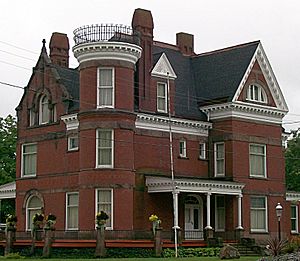 The Barnesville Historic District consists of the oldest part of Barnesville, Ohio, originally platted in 1808 and contains roughly 40 acres and 180 buildings. The district was added to the National Register on July 19, 1984.

The area around Barnesville was settled by pioneer families, mostly Quaker, around the early 19th century. These early settlers arrived in the area after leaving Maryland, Pennsylvania and the southern states. A meeting house was built and cemetery was established to the east of the future site of Barnesville. This early settlement attracted the attention of a certain Maryland farmer.

Barnesville was first "laid out" in 1808 by James Barnes, who had travelled to the area hoping to create a new Quaker settlement in a rural setting. He found rolling landscape along a Drovers' road ideal for a site and soon platted out lots and roads for his new town. Barnes was not alone in this venture as his brother, David, also made the trek out in hopes to find a better place for his family. The Barnes brothers owned much land and had a hand in the development of the village, owning a tannery, a brick yard, mills, and several farming and crop lands.

James soon left to return to Maryland, but his brother stayed as mayor of the developing town and took up residence on Main Street. Much of the architectural heritage from this period is lost to the current Victorian buildings. During the mid-to-late 19th century, more settlers, tired of the cramped eastern seaboard, migrated to places like Barnesville. A railroad was placed through the town in 1857, leading to what would be Barnesville's population boom.

The railway brought with it industrialization and population growth. Watt Car and Wheel Company, The Eastern Ohio Glass Company, Hanlon Paper Company and the Barnesville Glass Company are some of the many manufacturing companies which moved into Barnesville during this time. The original plat was expanded to the north and south to accommodate the influx of residents. The town kept growing at a rate that the B&O Railroad built the town a much needed depot in 1916, which is also listed on the National Register.

It was during this time period that many of the current buildings were constructed, lending Barnesville a unique post-Civil War architectural theme. Many of the numerous churches were also built reflecting the variety of religious sectors that helped Barnesville grow (the town currently boasts 12 different churches within its limits).

The town particularly saw a growth during the World Wars, as the needs of the country turned to militarization. The Watt Car and Wheel Company increased production to keep up with the demand for coal, and also turned to manufacturing other wheel and accessory components for vehicles. The Glass Company also increased production for vehicles and ships during the war economy. When peace was finally declared after World War II, none in the town realized that it would begin a declining trend in the community.

The armistice of the Korean War finally signalled an end to the war-time production demanded during the 1940s and many communities suffered as a result. Barnesville soon saw many businesses close their doors during the next few decades. As redevelopment emerged in the late 1960s to early 1970s, many building from this period were erased from existence. The large warehouses were soon replaced with houses and smaller businesses.

The town began to recover from this setback during the late 1980s and early 1990s. The town's historical integrity has been fairly maintained leading to a sense of pride in the community. 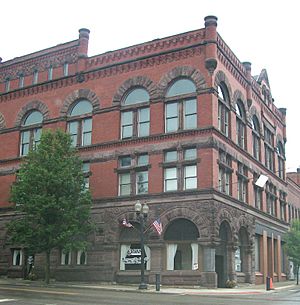 Many of the buildings currently standing date back to the Victorian era of building. The district includes several buildings well known in the area, such as the Bradfield Building, which once housed WesBanco, the Barnesville Municipal Building and the Belmont County Victorian Mansion Museum, as well as several private homes. The district totals 198 structures consisting of 180 contributing properties, as well as the Barnesville Railroad Tunnel located under the intersection of East Main and Arch Streets.

Much of the district play key roles in the Annual Barnesville Pumpkin Festival held every September, including West Main Street: the site of the King Pumpkin display.

All content from Kiddle encyclopedia articles (including the article images and facts) can be freely used under Attribution-ShareAlike license, unless stated otherwise. Cite this article:
Barnesville Historic District Facts for Kids. Kiddle Encyclopedia.