The Barracks Arch is located on the corner of Malcolm and Elder Streets, at the western end of St Georges Terrace in Perth, Western Australia.

The Pensioner Barracks in 1905

Architect Jewell designed the three-storey building in Tudor style that resembled a medieval castle. The building was brick, rather than more expensive stone, and horizontal lines emphasised by using lines of paler colour bricks underneath the windows. The roof was made of timber shingles. The building was finished in 1866, and was later extended to house an additional 21 families. Each family apartment had two rooms, each about 13 by 11 feet (4.0 by 3.4 m), with at least one fireplace. The outbuildings included a cookhouse, firing range and gun-room, wash-house, stores and stables, and a fives court constructed later.

A fire in 1887 destroyed the timber flooring of the east wing and the second floor of the central section. Water was pumped by hand pumps from the Swan River and brought by buckets through a chain of volunteers. The burnt sections were later restored.

The Barracks were gradually converted to offices for the Public Works Department between 1900 and 1904, becoming its headquarters in 1904. Notable occupants included C. Y. O'Connor, whose office was immediately above the arch. The fives court housed the drawing office, and eventually connected to a mid-1920s addition for the Metropolitan Water Supply, Sewerage and Drainage department. The Public Works Department and Metropolitan Water Board moved to Dumas House in March 1966. 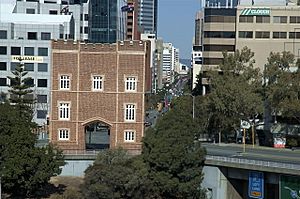 The Government intended to demolish the Barracks to facilitate the building of the Mitchell Freeway after the departments moved to their new location. The Royal Western Australian Historical Society formed a Barracks Defence Council in 1961, and joined the public outcry against demolition in 1966. The Barracks Defence Council worked to keep the arch and five bays of windows either side, and at worst, keep only the gateway and towers. Meanwhile, demolition proceeded, with the third and fourth bays of windows demolished and rubble cleared.

Opinion polls were conducted to gauge the public's preferences. A March 1966 poll by radio station 6IX received 2,747 votes to retain the arch and 59 votes for demolition. The West Australian newspaper's July poll recorded 9,681 votes for retention and 1,345 against. Cabinet authorised a Gallup poll, which showed 49% of votes for retention, 35% against, 11% no opinion, and 5% for moving the arch elsewhere. Premier Sir David Brand interpreted the results as indecisive, and declared Parliament would decide on the arch's fate on a non-party basis. The motion to demolish the arch was defeated on 19 October 1966, by 26 votes to 18.

The Barracks Arch blocks the otherwise unobstructed view from Parliament House down the length of St Georges Terrace and conversely of Parliament House from St Georges Terrace. The arch is within the precinct where parliament itself has planning jurisdiction in priority to the local government, the City of Perth, and it was intended that demolition of the arch would provide unobstructed views. That intention was a prime argument advanced in favour of the demolition.

The Public Works Department retained the arch and landscaped the surrounding area.

All content from Kiddle encyclopedia articles (including the article images and facts) can be freely used under Attribution-ShareAlike license, unless stated otherwise. Cite this article:
Barracks Arch Facts for Kids. Kiddle Encyclopedia.