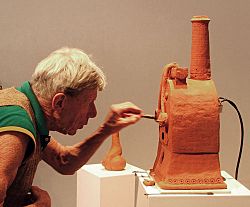 Ian Barry Brickell OBE (26 October 1935 – 23 January 2016), better known as Barry Brickell, was a New Zealand potter and conservationist. He was the founder and builder of the Driving Creek Railway in the Coromandel Peninsula, a popular tourist attraction. He was born in New Plymouth and grew up in Auckland.

All content from Kiddle encyclopedia articles (including the article images and facts) can be freely used under Attribution-ShareAlike license, unless stated otherwise. Cite this article:
Barry Brickell Facts for Kids. Kiddle Encyclopedia.