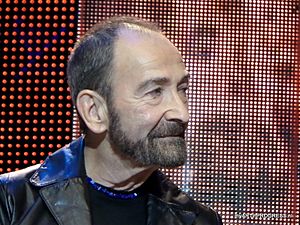 Barry Dennen (February 22, 1938 – September 26, 2017) was an American actor, singer, and screen and television writer. He played Pontius Pilate on the original recording, and later in the movie, of Jesus Christ Superstar. He also had roles in The Shining (1980) and in Titanic (1997). He was born in Chicago, Illinois.

Dennen was a closeted homosexual until his later years. He died in Burbank, California on September 26, 2017 from complications of a fall at the age of 79.

All content from Kiddle encyclopedia articles (including the article images and facts) can be freely used under Attribution-ShareAlike license, unless stated otherwise. Cite this article:
Barry Dennen Facts for Kids. Kiddle Encyclopedia.