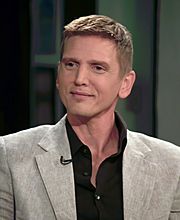 Barry Robert Pepper (born April 4, 1970) is a Canadian movie, television and voice actor. He is known for his roles as Dean Stanton in the 1999 movie The Green Mile, Robert F. Kennedy in the 2011 mini-series The Kennedys and Saving Private Ryan (the sniper). He won an Emmy Award in 2011 for his role as Robert F. Kennedy.

Pepper was born in Campbell River, British Columbia, Canada. Pepper has been married to Cindy Pepper since 1997. They have a child.

All content from Kiddle encyclopedia articles (including the article images and facts) can be freely used under Attribution-ShareAlike license, unless stated otherwise. Cite this article:
Barry Pepper Facts for Kids. Kiddle Encyclopedia.