Baru is an extinct genus of Australian mekosuchine crocodilian. It was semi-aquatic, around 4 m (13 ft) in length. Being semi-aquatic its habitat was around fresh pools of water in wet forests, ambushing their prey, much like modern species. The word Baru is Aboriginal and means "crocodile's ancestor". 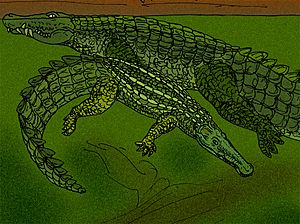 Fossils have been found in Australia at Riversleigh in north-western Queensland and Alcoota Station it the Northern Territory.

There are currently three valid species within the genus Baru. The type species B. darrowi is known from the Middle Miocene of the Northern Territory and is the largest reaching size of 4–5 m in length. It is named after English actor Paul Darrow. Two older species, B. huberi and B. wickeni are known from the Late Oligocene Etadunna Formation of Queensland.

All content from Kiddle encyclopedia articles (including the article images and facts) can be freely used under Attribution-ShareAlike license, unless stated otherwise. Cite this article:
Baru Facts for Kids. Kiddle Encyclopedia.