Base and superstructure facts for kids 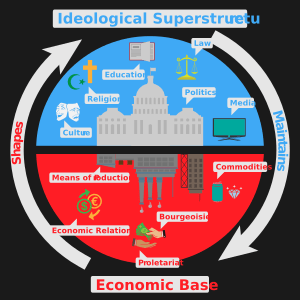 According to Marxism, society is made up of the base (substructure) and the superstructure. These two parts influence each other.

The base (economy) is made up of the means of production (such as land, factories, raw materials) and the relations of production, or the social relations people enter in order to survive (such as being an employer or an employee or what social class someone is part of).

The superstructure (ideology) is made up of the non-material things (such as institutions, laws, religion, culture) that make up society and shape how people think about themselves and their place in the world. The superstructure shows the interests of the ruling class.

The base and the superstructure need each other. They also change over time.

All content from Kiddle encyclopedia articles (including the article images and facts) can be freely used under Attribution-ShareAlike license, unless stated otherwise. Cite this article:
Base and superstructure Facts for Kids. Kiddle Encyclopedia.