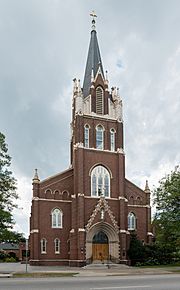 An east view of the basilica

The St. Peter's Church was listed the National Register of Historic Places in 1989.

The first resident Catholic priest came to Columbia in 1820. St. Peter's first church, designed by the South Carolina architect Robert Mills, was completed in 1824. This church was demolished in the early 1900s to build the new sanctuary.

The new church was designed by Frank Pierce Milburn, a Southern architect. The planning and fundraising was done largely by Father Thomas J. Hegarty. Construction started in 1906 and was completed in 1908. The dedication was in January 1909.

The Gothic Revival church was built with dark red brick with Bedford limestone and dull glazed terra cotta trim. The roof was Buckingham Slate. The spire is topped with a cross and is 163 ft (49.7 m) above grade.

The church graveyard is to the rear of the church.

All content from Kiddle encyclopedia articles (including the article images and facts) can be freely used under Attribution-ShareAlike license, unless stated otherwise. Cite this article:
Basilica of St. Peter (Columbia, South Carolina) Facts for Kids. Kiddle Encyclopedia.