Batrachedra tristicta is a species of moth in the family Batrachedridae. It is endemic to New Zealand.

This species was first described by Edward Meyrick in 1901 using material collected at Makatoku, in the Hawkes Bay, in March. George Hudson discussed and illustrated this species both in his 1928 publication The Butterflies and Moths of New Zealand and his 1939 supplement to that work. The lectotype specimen is held at the Natural History Museum, London.

Meyrick described B. tristicta as follows:

This species is endemic to New Zealand. Along with the type locality in the Hawkes Bay, this species has also been collected in Fiordland. 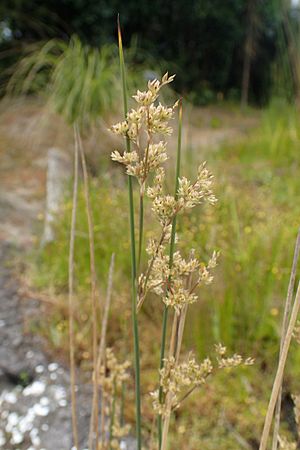 The adults of this species are on the wing in March.

The larvae feed on the flowers and seed heads of rushes including wiwi (Juncus edgariae) and soft rush (Juncus effusus).

All content from Kiddle encyclopedia articles (including the article images and facts) can be freely used under Attribution-ShareAlike license, unless stated otherwise. Cite this article:
Batrachedra tristicta Facts for Kids. Kiddle Encyclopedia.