It is found growing in wet areas, such as wetlands, riparian areas, and marshes. In the United Kingdom it is found in purple moor-grass and rush pastures and fen-meadow plant associations.

Juncus effusus grows in large clumps about 1.5 metres (4 ft 11 in) tall at the water's edge along streams and ditches, but can be invasive anywhere with moist soil. It is commonly found growing in humus-rich areas like marshes, ditches, fens, and beaver dams.

The stems are smooth cylinders with light pith filling. The yellowish inflorescence appears to emerge from one side of the stem about 20 centimetres (8 in) from the top. In fact the stem ends there; the top part is the bract, that continues with only a slight colour-band marking it from the stem. The lower leaves are reduced to a brown sheath at the bottom of the stem.

Juncus effusus can be differentiated from the rarer Juncus pylaei by the number of ridges on the stem. Juncus effusus has 30 to 40 ridges and J. pylaei has 10 to 20. 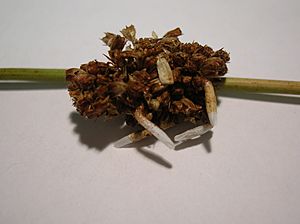 The species provides wildfowl, wader feeding, and nesting habitats, and also habitats for small mammals. The rootstalks are eaten by muskrats, and birds take shelter amongst the plant's stems. A number of invertebrates feed on soft rush, including the rufous minor moth.

Juncus effusus is listed as one of the seven ingredients of Hui sup tea. In Japan, this rush is grown to be woven into the covering of tatami mats. In Iran and Afghanistan too it is used to weave light cheap mats. It is called halfa (حلفا) and has medicinal uses too. In Europe, this rush was once used to make rushlights (by soaking the pith in grease), a cheap alternative to candles.

The species is cultivated as an ornamental plant, for planting in water gardens, native plant and wildlife gardens, and for larger designed natural landscaping and habitat restoration projects.

The cultivar Juncus effusus 'Spiralis' (syn. Juncus spiralis), with the common names corkscrew rush or spiral rush, is a distinctive potted and water garden plant due to its very curled spiral like foliage.

Juncus effusus can become a naturalized or invasive species, undesirable in rangelands for its unpalatability to livestock. Suggested methods of controlling rushes include: ploughing; high applications of inorganic fertilizer (can pollute watersheds); and topping to prevent seed formation.

All content from Kiddle encyclopedia articles (including the article images and facts) can be freely used under Attribution-ShareAlike license, unless stated otherwise. Cite this article:
Juncus effusus Facts for Kids. Kiddle Encyclopedia.