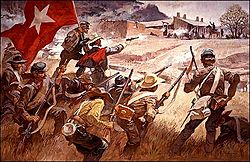 The Battle of Glorieta Pass was a battle during the American Civil War. It was fought in New Mexico Territory on 28 March 1862. It was one of the farthest west battles of the war. There was a skirmish (or minor battle between small groups) on March 26. This was between scouting parties from each army. The main battle took place on March 28. The Confederates were able to push the Union force back through the pass. However, the Confederates had to retreat when their supply train was destroyed and most of their horses were run off. Eventually, the Confederates had to leave the territory and return to Texas.

All content from Kiddle encyclopedia articles (including the article images and facts) can be freely used under Attribution-ShareAlike license, unless stated otherwise. Cite this article:
Battle of Glorieta Pass Facts for Kids. Kiddle Encyclopedia.