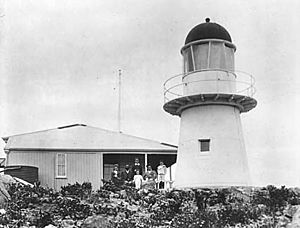 Bay Rock Light, 1917. The keeper's house can be seen on the left

Bay Rock Light is an inactive lighthouse which used to be located on Bay Rock, a rocky islet northwest of Magnetic Island, about 20 kilometres (12 mi) north of Townsville, Queensland, Australia. First lit in 1886, it was automated in 1920 and deactivated in the 1980s. It was relocated in 1992 to the Townsville Maritime Museum, where it is now displayed. 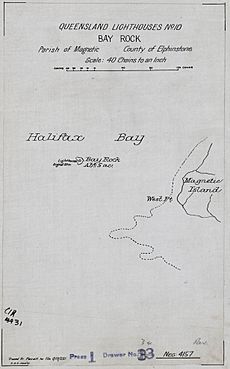 Chart of the original location of Bay Rock Light, chart made in 1921

The lighthouse was 8 metres (26 ft) high, made of a timber frame clad with zinc-annealed galvanized corrugated iron sheets. It was the fourth in a group of eight lighthouses made of hardwood frame clad with corrugated iron, which included, by order of establishment Little Sea Hill Light, Grassy Hill Light, Goods Island Light, itself, Old Caloundra Light, North Point Hummock Light (demolished), Gatcombe Head Light (demolished) and Bulwer Island Light. The original light source was a Kerosene mantle with an intensity of 1,200 cd. Standing at an elevation of 29 metres (95 ft), it showed a characteristic of a group of red and white flashes every six seconds (Gr. W.R. 6s) which was visible for 14 nautical miles (26 km; 16 mi) for the white flashes and 7 nautical miles (13 km; 8.1 mi) for the red ones. The original lens was a 4th order dioptric.

The lighthouse was originally manned, and a small cottage accommodated the keeper and his family. The last keeper was John Albert Edward Lawson. In March 1920 John Lawson was lost at sea when a small fishing boat capsized. This led to the decision to automate the operation of the lighthouse, and it was demanned in 1920. The light was converted to an automatic acetylene gas burner (carbide lamp).

During the 1980s the lighthouse was deactivated and replaced with a small fiberglass beacon. The beacon has NGA number 111-10030 and Admiralty number K3117. It is still active, displaying a characteristic of two white flashes, every eight seconds (Fl.(2)W. 8s).

The Townsville Maritime Museum is located on the south side of Ross Creek, in Townsville. It is open daily, for a fee.

All content from Kiddle encyclopedia articles (including the article images and facts) can be freely used under Attribution-ShareAlike license, unless stated otherwise. Cite this article:
Bay Rock Light Facts for Kids. Kiddle Encyclopedia.