Beacon Hill Battery (also known as Beacon Hill Fort) is a ruined military fort that was built to defend the port of Harwich, Essex. It is a scheduled ancient monument.

Prior military use of the site 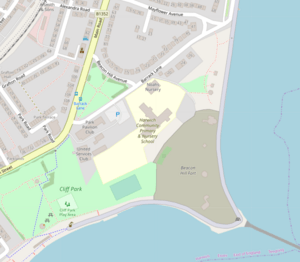 The first fortification built on the site was one of three blockhouses, constructed during the reign of Henry VIII, following his visit to the town in 1543. These were Device Forts, built at Tower House, Middle House and the House-upon-the-Hill. They were abandoned within ten years, only to be briefly revived in 1588, owing to the threat posed by the Spanish Armada. By 1625 the site had again fallen into disrepair and Harwich was considered to be defenceless. The site of the actual blockhouse was destroyed by erosion.

The site was chosen for Harwich Barracks. These were built in 1803. The original occupants were the West Essex Regiment and the Royal Buckinghamshire Militia. They subsequently housed most of the Harwich army and militia camp during almost the whole French Revolutionary and Napoleonic Wars era, and a naval signal station. In the 19th century, prior to the building of the Breakwater, sea erosion swept away much of the site. The Harwich Redoubt, completed 200 yards to the north in 1810, was originally known as the Harwich Circular Battery, and had ten 24-pound guns. In 1862 these guns were upgraded as a result of the 1860 Royal Commission on the Defence of the United Kingdom.

By the 1880s the fort was considered outdated and in 1889 work began on a totally new fort, which was completed in 1892. After World War I the fort was disarmed and sold. In 1940 it was brought back into service as a consequence of World War II and a twin 6 Pounder gun position and director tower were built. It became known as Cornwallis Battery. It was manned by men of the 515th Coast Regiment, Royal Artillery.

The site also included the two 6-inch guns of Beacon Hill Battery. Both were manned by men of the 515th Coast Regiment, Royal Artillery. The hexagonal brick radar tower, adjacent to the site, dates from 1941 and, together with electrical firing stations at the breakwater corner, and at Landguard Point, was for controlling the defensive mines in the harbour entrance. It did not control the fire of the guns—new radar at Landguard arriving for this purpose in 1944. The Beacon Hill site also from time to time housed anti-aircraft guns and torpedo tubes.

The fort was finally decommissioned in 1956 on the dissolution of coast artillery in the United Kingdom.

In early 2018, part of Beacon Hill Battery was bought by Paul Valentine and Barry Sharp as part of a restoration project. More information on the project and opening times can be found via the Beacon Hill Fort website.

All content from Kiddle encyclopedia articles (including the article images and facts) can be freely used under Attribution-ShareAlike license, unless stated otherwise. Cite this article:
Beacon Hill Battery Facts for Kids. Kiddle Encyclopedia.