The Beagle 2 was a British Mars lander that was carried to Mars by the European Space Agency's 2003 Mars Express mission. It was an astrobiology mission that was designed to look for past life on the shallow surface of Mars.

The Beagle 2 was conceived by a group of British academics. It was led by Professor Colin Pillinger of the Open University.

The spacecraft successfully arrived in orbit round Mars on 19 December 2003. It was going to land on the surface of Mars on 25 December. There was no contact at the expected time of landing. ESA declared that the mission was lost in February 2004, after several attempts to contact the spacecraft were unsuccessful.

Beagle 2's fate remained a mystery until January 2015. Then it was found on the surface of Mars by a series of images from NASA's Mars Reconnaissance Orbiter HiRISE camera. The images suggest that two of the spacecraft's four solar panels failed to deploy, blocking the spacecraft's communications antenna.

The Beagle 2 was named after HMS Beagle, the ship used by Charles Darwin. 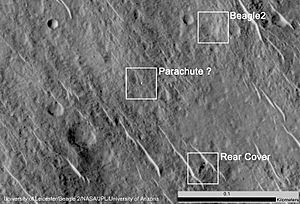 Image of the possible landing site of Beagle 2

All content from Kiddle encyclopedia articles (including the article images and facts) can be freely used under Attribution-ShareAlike license, unless stated otherwise. Cite this article:
Beagle 2 Facts for Kids. Kiddle Encyclopedia.