Colin Trevor Pillinger, CBE FRS FRAS FRGS ( 9 May 1943 – 7 May 2014) was an English planetary scientist. He was a founding member of the Planetary and Space Sciences Research Institute at Open University in Milton Keynes, he was also the principal investigator for the failed British Beagle 2 Mars lander project, and worked on a group of Martian meteorites.

Pillinger was born on 9 May 1943 in Kingswood, South Gloucestershire, just outside Bristol. His father, Alfred, a manual worker for the Gas Board, and his mother, Florence (née Honour), also had a daughter who was six years older than Colin. He attended Kingswood Grammar School, and later graduated with a BSc and a Ph.D. in Chemistry from University College of Swansea (now Swansea University). He said of himself, "I was a disaster as a science student".

Pillinger's first job was working for NASA. He was involved in the Apollo space programme and ESA's Rosetta mission and analysed the lunar samples brought back by Apollo 11.

"As an organic chemist, turned geologist, turned astronomer who uses isotopic analyses to unravel the origins of life, our planet, the solar system and the stars, I hope I have something in common with the versatile men who were early Gresham Professors. The subjects which I research already enjoy popular interest; by combining them to produce a story of life told from the genealogy of its elements, my aim is to appeal to the widest possible audience, using an interdisciplinary approach to attempt to unravel the time-honoured puzzle, where do I come from?" 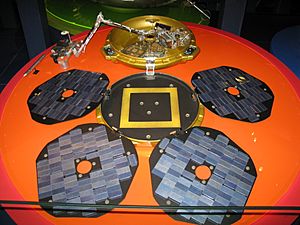 Replica of Beagle 2 in the London Science Museum

Pillinger is credited with inspiring many people to take an interest in space science, particularly in Britain. He was responsible for training and supporting a large number of experts in the field as well as helping to unite the space science and industrial communities in the UK. Pillinger worked as a conference and after-dinner speaker for the JLA agency.

In 2000, a main belt asteroid was named 15614 Pillinger after Colin Pillinger. In 2003, Pillinger was appointed a CBE in the Queen's Birthday Honours List for his services to Higher Education and to Science. Pillinger played a role in the Philae lander that was part of the Rosetta mission which successfully made its rendez-vous with comet 67P/Churyumov–Gerasimenko in 2014. In particular he was an advocate of the idea of deploying the lander Philae to conduct scientific experiments in situ, and was instrumental in getting the Ptolemy device accepted as part of the science payload.

Pillinger's widow, Judith, is also a scientist. They met when working in the same laboratory and had two children, a son, Nicolas Joseph and a daughter, Shusanah Jane, who in 2015 became the first solo British woman to complete the Race Across America ultra-endurance cycle race.

After experiencing difficulty with walking for two years, Pillinger was diagnosed with progressive multiple sclerosis in May 2005. He owned a dairy farm, but his illness prevented him from doing physical work on the farm. Pillinger died two days before his 71st birthday at Addenbrooke's Hospital in Cambridge on 7 May 2014.

Beagle 2 has been mentioned in Hollywood films Transformers: The Movie and Pillinger's work on asteroid impacts in Jurassic Park. A missing British Mars spacecraft was the subject of the 2005 Doctor Who Christmas Special. Pillinger appeared in Top Gear season 3 episode 7 and won a contest based on the best burnout. Beagle 2 featured in a science fiction story by Stephen Baxter and as one of the subject in The Backroom Boys by Frances Spufford. Pillinger's studies on Martian meteorites could be considered as the basis of the bestselling book Deception Point by Dan Brown.

Chronology of qualifications, career, and awards:

All content from Kiddle encyclopedia articles (including the article images and facts) can be freely used under Attribution-ShareAlike license, unless stated otherwise. Cite this article:
Colin Pillinger Facts for Kids. Kiddle Encyclopedia.