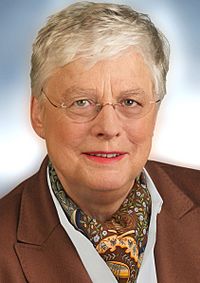 Beatrix Philipp (née Hellweg; 7 July 1945 – 1 May 2019) was a German politician. She was a member of the Christian Democratic Union (CDU). She served on the city council of Düsseldorf from 1975 to 1985. She was a member of the Landtag of North Rhine-Westphalia from 1985 to 1994. In 1994, she was elected to the national Bundestag, serving until 2013. Outside of politics, Philipp was a headmistress.

Philipp was born in Mönchengladbach. She had two children and was a Roman Catholic.

All content from Kiddle encyclopedia articles (including the article images and facts) can be freely used under Attribution-ShareAlike license, unless stated otherwise. Cite this article:
Beatrix Philipp Facts for Kids. Kiddle Encyclopedia.