Beauty (formerly Himlerville) is an unincorporated community in Martin County, Kentucky, United States. During the early 1920s the community was the home of the Himler Coal Company, a cooperative mining venture conducted by a group of Hungarian immigrants.

In the mountains of Eastern Kentucky once existed the unique, Hungarian community of Himlerville. Martin Himler emigrated from Hungary to New York and, eventually, to Martin County and established the Himler Coal Company and soon after the town of Himlerville. He contacted other Hungarians to share in his dream of an all Hungarian community nestled deep in the Appalachian Mountains. 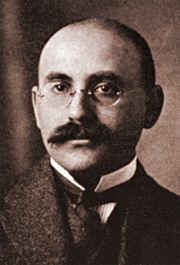 Himlerville became a lively community of industrious Hungarian immigrants. More than 200 homes were built, as well as, many businesses to supply the coal mine and the town's residents. A railroad was constructed, along with a bridge over the Tug River to transport supplies, lumber and coal in and out of Himlerville. A bank was established, as well as schools, churches, and a town hall for community gatherings.

Himlerville had its own water reservoir and power station that gave electricity thus life to the town; it even had its own newspaper which was printed in both English and Hungarian. During the 1920s, Himlerville was a very progressive town with many thriving businesses to accommodate its unique population.

In 1928, Himlerville Coal Company went bankrupt and Martin Himler left, leaving behind a mansion on the hill and his dream of an all Hungarian community. Most of the residents soon followed, never to return. Later on, the name of the town was changed to Beauty and very little remains of this once exclusive Hungarian community in the mountains of Eastern Kentucky.

Beauty was the childhood home of country singer Angaleena Presley.

All content from Kiddle encyclopedia articles (including the article images and facts) can be freely used under Attribution-ShareAlike license, unless stated otherwise. Cite this article:
Beauty, Kentucky Facts for Kids. Kiddle Encyclopedia.