The chain originated in Killaloe, Ontario in 1978 and opened its first permanent store in Ottawa two years later. By 2018, it had 140 franchise and license locations in six countries: Canada (the Maritimes, Newfoundland and Labrador, Ontario, Manitoba, Alberta, British Columbia and Quebec, where the franchise is called "Queues de Castor"), the United States, the United Arab Emirates, Mexico, France, and Japan.

BeaverTails began when Grant and Pam Hooker turned their family recipe for fried dough into a corporate business. They sold their first pastries at the Killaloe Craft and Community Fair in 1978. Two years later, they opened the first BeaverTails stand in the Byward Market in Ottawa. In 1987, Pino Di Ioia accepted a summer position as the manager of the BeaverTails location at La Ronde. In 2002, along with his wife and twin brother, they took over the management of BeaverTails. 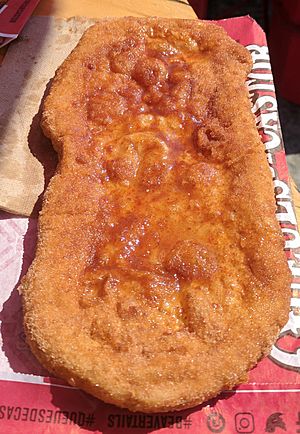 A classic BeaverTails pastry with cinnamon and sugar

The BeaverTail is a fried dough pastry that is sold in a variety of flavours. Most flavours of BeaverTails are topped with sweet condiments and confections, such as whipped cream, banana slices, crumbled oreos, cinnamon sugar, and chocolate hazelnut. BeaverTails are also made in savoury variations, such as with poutine or hotdogs.

"BeaverTails" and "Queues de Castor" have been registered as trademarks since 1988 by BeaverTails Canada Inc and its affiliated companies. 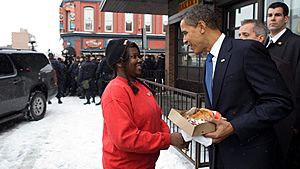 BeaverTails received media attention in the US and Canada when it was served at the Canadian embassy during the first inauguration of U.S. President Barack Obama. The product was also mentioned in newscasts during the lead-up to his visit to Ottawa on February 19, 2009, as an example of how Canadian businesses were participating. While in town, he stopped at the ByWard Market on his way to the Ottawa International Airport to buy a BeaverTails pastry. One variation of the product was called the "Obama Tail", in honour of the visit.

All content from Kiddle encyclopedia articles (including the article images and facts) can be freely used under Attribution-ShareAlike license, unless stated otherwise. Cite this article:
BeaverTails Facts for Kids. Kiddle Encyclopedia.