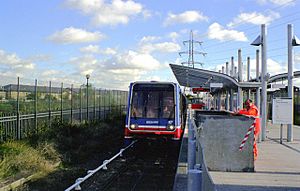 Beckton is an area in East London, England. It is part of the London Borough of Newham. It is located 8 miles (12.9 km) east of Charing Cross. Beckton was unpopulated marshland until the 19th century. More housing was needed as London grew, so housing was created in Beckton for workers at the gas and sewage works. Between 1981 and 1995 Beckton was within the London Docklands Development Corporation area. This caused the population to increase as new homes were built and the Docklands Light Railway (DLR) was constructed. Beckton has a station on the DLR.

All content from Kiddle encyclopedia articles (including the article images and facts) can be freely used under Attribution-ShareAlike license, unless stated otherwise. Cite this article:
Beckton Facts for Kids. Kiddle Encyclopedia.