The film premiered at the 68th Berlin International Film Festival on 21 February 2018, and was theatrically released in Sweden on 14 September 2018, as well as in Denmark on 31 January 2019.

Children from all over the world write letters to Astrid Lindgren (Maria Fahl Vikander), which makes her dream back to her youth in Småland. When she (Alba August) worked at Vimmerby tidning, she falls in love with the chief editor, Reinhold Blomberg (Henrik Rafaelsen), who is 30 years her senior. She becomes pregnant with a son, Lars. As an unwed mother, she chooses to give birth to her son in Copenhagen, where she did not have to disclose the father's name.

Her son spent his first years in a Danish foster family. At the Royal Automobile Club, Astrid met Sture Lindgren (Björn Gustafsson), who later came to be her husband.

Principal photography took place at Marquardt Palace in Potsdam, Brandenburg, Germany as well as in Västra Götaland in Sweden. 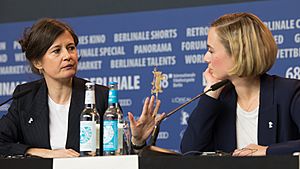 All content from Kiddle encyclopedia articles (including the article images and facts) can be freely used under Attribution-ShareAlike license, unless stated otherwise. Cite this article:
Becoming Astrid Facts for Kids. Kiddle Encyclopedia.