Kids Encyclopedia Facts
For the Canadian side of this binational town, see Stanstead, Quebec. 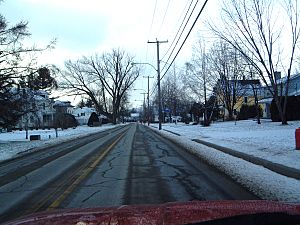 Heading west on Canusa St. The border is determined by the yellow road line, making houses on the left fall under American jurisdiction, while the right side is governed by Canada. Both sides are part of Beebe Plain, however.

The international border runs up the middle of Canusa Street (Quebec Route 247). Local legend claims that a group of rather drunken surveyors, when given the task of determining the United States-Canada border line in the region (nominally at 45.00°N), decided to place the border right through the center of the village along what is now Canusa Street.

Beebe Plain is part of a group of nearby border villages which includes Derby Line, Vermont and Stanstead, Quebec. Beebe Plain is located near Lake Memphremagog between Newport and Magog.

The village was founded circa 1798 by Thomas B. Beebe b. 1776 in Windsor, Vermont. The article below clarifies the history of the Beebe Plain settlement.

The Settlement of Beebe (by T. Lee Quimby)

A disputed point has arisen as to the early settlement of the village of Beebe Plain, which should be cleared up.

Forests and Clearing (misspelling should be Clearings) states that it was founded by David and Calvin Beebe in 1798; that the name of the village is commemorative of those men.

A local historian, the late respected George H. House who took much pride and interest in local history, prepared a very excellent paper on the history of the village and its families some years ago, and which, was read before the Women's Institute in 1922 on the occasion of the celebrated of the 15th anniversary of the setting off of the village as a separate municipality, stated that the first settler was Thomas Beebe, father of David and Calvin Beebe and the date of his arrival there was 1790.

There seems little doubt that both F. and C. were right in main particulars and wrong in others. The date of settlement was in probability 1798, two years after the settlement of Stanstead Plain and that Thomas Beebe was its first Settler.

From Anson Beebe, secretary treasurer of the city of Newport, son of the late Hoel Beebe and grandson of Calvin Beebe, we have had information confirming Mr. House's version of its first settler, viz., Thomas Beebe, but he is sure that instead of 1790 as stated in Mr. Houses paper the date of its founding is 1793 (typo should be 1798), as given in Forest and Clearnings (Clearings).

The former Massawippi Valley Railway line once joined Lennoxville, Quebec through a border crossing at Beebe Plain to Newport, Vermont. That line was abandoned and removed by the Canadian Pacific Railway in 1989–1991. Portions of the former right-of-way remain open for recreational use:

All content from Kiddle encyclopedia articles (including the article images and facts) can be freely used under Attribution-ShareAlike license, unless stated otherwise. Cite this article:
Beebe Plain, Vermont Facts for Kids. Kiddle Encyclopedia.