The Bellinger River turtle, (Myuchelys georgesi Cann, 1997) is a species of turtle in the family Chelidae. The species is of moderate size (carapace length to 240 mm in females, 185 mm in males), and is endemic to Australia with a highly restricted distribution to the small coastal drainage of the Bellinger River in New South Wales. In the past the species was considered locally abundant. The species' preferred habitat is the deeper pools of the clear-water upstream reaches of the river, where water flows continuously in most months over a bedrock basement and a stream bed of boulders, pebbles, and gravel.

The specific name, georgesi, is in honor of Australian herpetologist Arthur Georges.

Myuchelys georgesi is found in the Bellinger River and its tributaries, mid-eastern New South Wales, Australia.

The preferred habitat of M. georgesi is the deeper pools of the clear-water upstream reaches of the river, where the water flows continuously in most months over a bedrock basement and a boulder, pebble and gravel bed. The species takes advantage of the highly oxygenated water with low particulate load by supplementing its oxygen uptake through cloacal breathing.

M. georgesi is essentially an omnivore, with tendencies leaning toward carnivory. A high proportion of their food comes from benthic macro-invertebrate communities that are relatively sedentary and live in immediate association with the substratum, but with some terrestrial fruit and aquatic vegetation eaten.

Within the Bellinger drainage, a very restricted range, the species is widely distributed and locally abundant. Current threats to its persistence include habitat modification and loss of native riparian vegetation, associated turbidification and sedimentation, predation by the introduced European fox, and competition with the recently introduced turtle Emydura macquarii. As of 2015, greater than 90% of the adult population was wiped out by a virus and the animal is functionally extinct in the wild. Breeding programs are working to reestablish a healthy population. 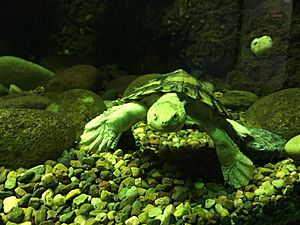 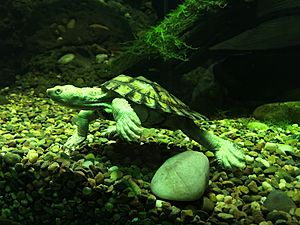 All content from Kiddle encyclopedia articles (including the article images and facts) can be freely used under Attribution-ShareAlike license, unless stated otherwise. Cite this article:
Bellinger River snapping turtle Facts for Kids. Kiddle Encyclopedia.