Ainslie is one of the most successful sailors in Olympic history. He won medals at five consecutive Olympics from 1996 onwards, including gold at the four Games held between 2000 and 2012.

He is one of three athletes to win medals in five different Olympic Games in sailing, being the third person to win five Olympic medals in that sport (after Torben Grael and Robert Scheidt) and also the second to win four gold medals, after Paul Elvstrøm.

Ainslie was born in Macclesfield, England to Roderick and Sue Ainslie. Roderick captained a boat that took part in the first Whitbread Round The World Race in 1973. Ben's elder sister, Fleur, is married to Jerome Pels, secretary general of the International Sailing Federation (ISAF). Ainslie was educated at two independent schools: at the Terra Nova School in a rural area near the village of Holmes Chapel in Cheshire in north west England, and Truro School in the city of Truro, Cornwall, followed by Peter Symonds Sixth Form, Winchester, Hampshire.

Ainslie learned to sail at Restronguet Creek near Falmouth, Cornwall.

He started sailing at the age of eight and first competed at the age of ten. His first international competition was aged twelve at the 1989 Optimist world championships held in Japan where he placed 73rd.

Ainslie won silver at the 1996 Olympic Games and gold in the 2000 Summer Olympics in the Laser class. He gained some 18 kilograms (40 lb; 2 st 12 lb) and moved to the larger Finn class for the 2004 Summer Olympics, where he won gold, a feat he repeated in the 2008 and 2012 competitions. Both his gold medal winning Laser and Finn dinghies are currently displayed at the National Maritime Museum Cornwall.

On 19 May 2012, Ainslie became the first person to carry the Olympic torch in the UK. Starting the 70-day tour of the United Kingdom at Land's End, he was the first of 8,000 torch carriers. He was selected on 11 August 2012 to carry the flag for the Great Britain team at the London 2012 Olympics closing ceremony.

At the 2011 ISAF Sailing World Championships he was in a winning position going into the closing stages of the regatta but was disqualified under rule 69 (gross misconduct) for physically threatening a photographer. Ainslie felt the photographer's boat's wake had prevented him from passing a competitor. 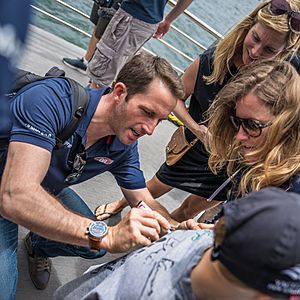 At the beginning of 2005 Ainslie worked in the role of tactician in the New Zealand-based Team New Zealand who were preparing to compete in the challenger selection process to win the right to Challenge for the 32nd America's Cup. In May 2005 Ainslie took the decision to relinquish the role of tactician and focus on improving his match racing skills as helmsman of the 'B' boat used to practise and tune the race boat helmed by Dean Barker.

Ainslie figureheaded a British challenge for the Cup alongside Sir Keith Mills the team was named Team Origin. However this challenge withdrew without competing following a period of discussion regarding the future format of the event.

In February 2017 Ainslie talked about the America's Cup and looked back on his Olympic success, "It hasn’t all been glory..There have been a few bumps down the road. But yes, I’m not very good at not achieving the goals I set out."

In December 2010, Ainslie finished in first place in the World Match Racing Tour, and is the 2010 ISAF Match Racing Champion.

In January 2014, it was announced that Ainslie would compete in the 2014 Extreme Sailing Series as part of his preparation for the America's Cup. The eight-race event will see him compete in a 40 feet (12 m) multi-hull boat.

Ainslie lives in Lymington, and belongs to the Royal Lymington Yacht Club. He is coached by David Howlett, who raced a Finn dinghy at the 1976 Summer Olympics. He supports Chelsea.

In August 2014, Ainslie was one of 200 public figures who were signatories to a letter to The Guardian expressing their hope that Scotland would vote to remain part of the United Kingdom in September's referendum on that issue.

All content from Kiddle encyclopedia articles (including the article images and facts) can be freely used under Attribution-ShareAlike license, unless stated otherwise. Cite this article:
Ben Ainslie Facts for Kids. Kiddle Encyclopedia.