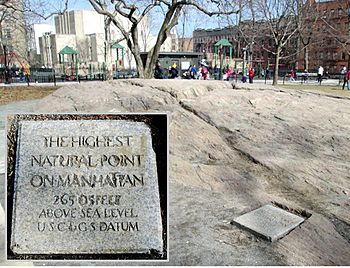 The highest natural point in Manhattan; in the inset is the stone marker seen in the lower right of the larger image. 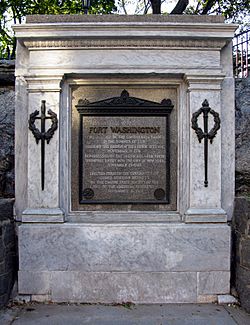 Bennett Park, also known as James Gordon Bennett Park, is a 1.8-acre (0.73 ha) public park in New York City, named for James Gordon Bennett, Sr., the newspaper publisher who launched the New York Herald in 1835. It is located between Pinehurst and Fort Washington Avenues and West 183rd and 185th Streets in the Hudson Heights neighborhood of Washington Heights in northern Manhattan, on land purchased by Bennett in 1871, the year before his death. It sits opposite the northern Fort Washington Avenue entrance to the 181st Street subway station on the IND Eighth Avenue Line, serviced by the A train.

The park, which opened in 1929, was built on the site of Fort Washington, from which the Continental Army delayed the advance of British troops in 1776. The commemorative marble, bronze and granite stele, with sculpture by Charles R. Lamb, is located on the eastern perimeter wall of the park, and was dedicated in 1901. In 1932, in commemoration of the bicentennial of the birth of George Washington, the Washington Heights Honor Grove Association planted an American elm tree, which is indicated with a marker. Other memorials in the park include the Emilio Barbosa Memorial, given in 1996 by Joseph Barbosa to honor his father, who died on the USS Nevada at Okinawa in 1945.

On the west side of the park lies an outcropping of Manhattan schist which is the highest natural point in Manhattan – 265 feet (81 m) above sea level – with a square stone marker attesting to the fact. The schist is part of the bedrock foundation of New York City, which allows the construction of skyscrapers where it lies close to the surface.

The park's playground was constructed in the 1940s, and service buildings were added in 1964.

Bennett Park hosts a variety of events, such as the Revolutionary War Reenactment, which Redcoats and George Washington's army actors converge and fight in the park, reenacting the battle of Fort Washington. An annual Harvest Festival is held in the park's field.

As part of the "Northern Manhattan Parks 2030 Master Plan", devised in 2010–11, the playground and comfort station in Bennett Park will be reconfigured to "improve sight-lines and play value." In addition, the condition of the park's perimeter will be improved.

All content from Kiddle encyclopedia articles (including the article images and facts) can be freely used under Attribution-ShareAlike license, unless stated otherwise. Cite this article:
Bennett Park (New York City) Facts for Kids. Kiddle Encyclopedia.