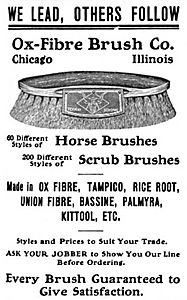 The Ox Fibre Brush Company was founded in Sanford in 1884 by John K. Robinson. Brushes were made from the fibers of the native cabbage (sabal) palms, which are both strong and flexible. The palms were harvested from a 500-600 acre plot of land owned by the company in what is now the Orlandia Heights subdivision. A few years later, the plant was moved to Jacksonville, Florida. In May 3, 1901, a fire in the plant destroyed the plant as well as a significant portion of Jacksonville. The plant was rebuilt in Sanford, Florida, and in 1925, it was moved to a 40 acre site at Benson Junction, where brooms and brushes were produced until the plant closed in the 1970s.

During the prominence of the Ox Fibre Brush Company at Benson Junction, the area also had a post office and a grocery store.

Benson Junction was included in the boundaries of DeBary, when DeBary incorporated as a city in 1993.

All content from Kiddle encyclopedia articles (including the article images and facts) can be freely used under Attribution-ShareAlike license, unless stated otherwise. Cite this article:
Benson Junction, Florida Facts for Kids. Kiddle Encyclopedia.