The restaurant operated in a "gasthaus" (converted house) at 12th Avenue and Powell in southeast Portland's Brooklyn neighborhood. Grant Butler of The Oregonian described the old house's interior as "cozy". The menu featured German cuisine and included cheese blintzes, fondue, rouladen, sauerbraten, sausages, and schnitzel, as well as German beers and wines. Scrambles with homemade veal sausage were available on the brunch menu.

Karen Brauer was a co-owner of the Berlin Inn, which opened in 1992 and operated for 21 years. Todd Haynes frequented the restaurant. In June 2013, Brauer confirmed plans to close and reopen under a new name:

This Saturday will be the last day that you will be able to enjoy the fabulous recipes of The Berlin Inn before we close for a month, after which we will re-open as The Brooklyn House Restaurant... Same house, same staff and a fresh new approach to European-style dining. Local, seasonal, comforting fresh food and beverages; leisurely dining; options for everyone, regardless of dietary preferences. From meat and potatoes to vegan and gluten free, all of our guests will have plenty of options for a delicious meal. 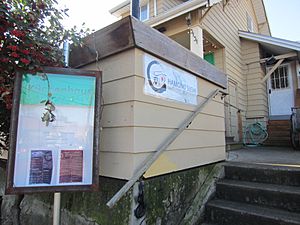 2021 photograph of the exterior of the building which housed the Berlin Inn, with a sign for Hamono Sushi

By 2020, sushi chef Albert Chen had opened the restaurant Hamono Sushi in the house which was previously occupied by the Berlin Inn and Brooklyn House, following "a period of inactivity".

All content from Kiddle encyclopedia articles (including the article images and facts) can be freely used under Attribution-ShareAlike license, unless stated otherwise. Cite this article:
Berlin Inn Facts for Kids. Kiddle Encyclopedia.