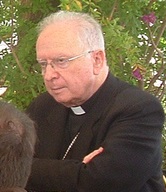 Bernard Louis Auguste Paul Panafieu (26 January 1931 – 12 November 2017) ) was a French prelate of the Catholic Church. He was Archbishop of Marseille from 1995 until his retirement in 2006. He was made a cardinal in 2003. He was born in Châtellerault, France.

Panafieu died on 12 November 2017 at a hospital in Venasque, France of complications from Parkinson's disease at the age of 86.

All content from Kiddle encyclopedia articles (including the article images and facts) can be freely used under Attribution-ShareAlike license, unless stated otherwise. Cite this article:
Bernard Panafieu Facts for Kids. Kiddle Encyclopedia.