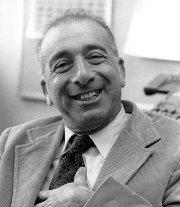 Berni Julian Alder (September 9, 1925 – September 7, 2020) was a German-born American physicist. His works focused in statistical mechanics, and an important person of numerical simulation in physics. He was born in Duisburg, Germany. In 2008, he became a member of the American Academy of Arts and Sciences. In 2009, he was honored with the National Medal of Science.

All content from Kiddle encyclopedia articles (including the article images and facts) can be freely used under Attribution-ShareAlike license, unless stated otherwise. Cite this article:
Berni Alder Facts for Kids. Kiddle Encyclopedia.