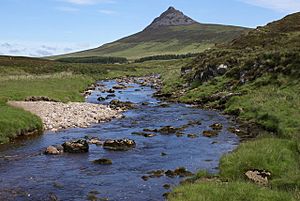 Berriedale (Scottish Gaelic: Bearghdal) is a small village on the northern east coast of Caithness, Scotland, on the A9 road between Helmsdale and Lybster, close to the boundary between Caithness and Sutherland. It is sheltered from the North Sea. The village has a parish church in the Church of Scotland.

Just south of Berriedale, on the way to the north, the A9 passes the Berriedale Braes, a steep drop in the landscape (brae is a Scots word for hillside, a borrowing of the Scottish Gaelic bràighe). The road drops down steeply (13% over 1,3 km) to bridge a river, before rising again (13% over 1,3 km), with a number of sharp bends in the road – although some of the hairpin bends and other nearby gradients have been eased in recent years.

The impracticality (and cost) of bridging the Berriedale Braes prevented the building of the Inverness-Wick Far North Line along the east coast of Caithness; instead the railway runs inland through the Flow Country.

All content from Kiddle encyclopedia articles (including the article images and facts) can be freely used under Attribution-ShareAlike license, unless stated otherwise. Cite this article:
Berriedale, Highland Facts for Kids. Kiddle Encyclopedia.