Berry & MacFarlane Monument is a heritage-listed memorial at Sherwood Road, Sherwood, Queensland, Australia. It was built in 1902. It was added to the Queensland Heritage Register on 21 October 1992.

This monument was erected in July 1902 by friends of two young soldiers, Sergeant Robert Edwin Berry (aged 23 years) and Acting Corporal John MacFarlane (aged 21 years), who were killed in action at Onverwacht in the Republic of Transvaal on 4 January 1902. The Berry family had long been resident in the Sherwood district, and were closely associated with St Matthew's Anglican Church in Sherwood Road (destroyed by fire in 1921).

Both young men were members of the 5th Queensland Imperial Bushmen and, like all Australian troops participating in the South African War (Boer War) of 1899–1902, were volunteers. As members of the QIB, however, they were under British command, and their pay was issued by the colonial government at English cavalrymen's rates.

The monument was carved by the masonry firm of W. Batstone & Sons of South Brisbane, and was erected in the grounds of St Matthew's Anglican Church and Cemetery at Sherwood. The monument was unveiled by the Queensland Premier, Robert Philp, on Saturday 21 June 1902. 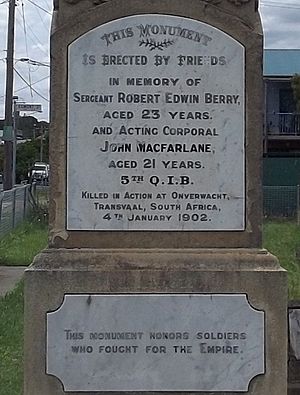 The sandstone monument is located near the front entrance gate of the Sherwood Anglican Cemetery, facing east.

It stands 15 feet 3 inches (4.65 m) high, and consists of a pedestal on a stepped sandstone base, rising to an obelisk draped by a tasselled shroud. Crossed rifles are carved in relief on the front face of the obelisk, which features a small cornice midway. The pedestal has two inscribed, leaded marble plates, and is ornamented with a trooper's hat and crossed swords in high relief at the base, and a rose and leaf design around the top.

The pedestal shows signs of spalling at the base, partly caused by the monument having been painted, and the relief detail is weathered. Originally the monument was surrounded by a stone kerbing and six posts linked by rails, with marble chips inside the border. The memorial now stands borderless and within two metres of the more recently erected columbarium.

Berry & MacFarlane Monument was listed on the Queensland Heritage Register on 21 October 1992 having satisfied the following criteria.

The Berry & MacFarlane Monument at Sherwood, erected in 1902, is significant historically as an expression of emergent Australian nationalism in the earliest years of federation.

It is a rare Queensland South African War monument, and a unique source of historical information.

It is a skilfully executed example of its type, and a good example of the work of prominent Brisbane monumental masons W. Batstone & Sons.

It is a skilfully executed example of its type, and a good example of the work of prominent Brisbane monumental masons W. Batstone & Sons.

All content from Kiddle encyclopedia articles (including the article images and facts) can be freely used under Attribution-ShareAlike license, unless stated otherwise. Cite this article:
Berry and MacFarlane Monument Facts for Kids. Kiddle Encyclopedia.