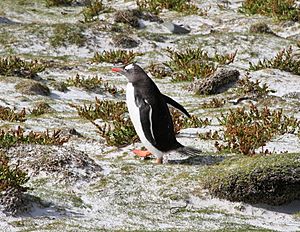 Gentoo penguin returning to its colony on Bertha's Beach 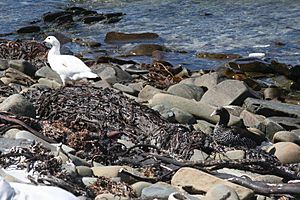 Bertha's Beach Important Bird Area comprises 3300 ha of coastal wetlands at the entrance to Choiseul Sound, on the east coast of East Falkland, in the Falkland Islands. It lies about 8 km south-east of Mount Pleasant Airport and 40 km south-west of Stanley. It has been identified by BirdLife International as an Important Bird Area (IBA) because of its significancer for a variety of migratory waders and other waterbirds. Overlapping it is the 4000 ha Bertha's Beach Ramsar site, recognising it as a wetland of international importance.

The site comprises the coast and its immediate hinterland from Fox Point to Bertha's Beach. It contains typical Falkland coastal wetland habitat with a white sand beach, coastal dunes, maritime heathland, freshwater ponds and brackish lagoons. The land behind Bertha's Beach is dominated by white grass plains. To the north-east of Bertha's Beach is a large area of coastal lowlands with islands and promontories, with kelp beds extending up to 4 km offshore.

Some 77 species of flowering plants have been recorded from the Ramsar site, including the rare Dusen's moonwort. There is breeding colony of southern sea lions at the nearby Kelp Islands. Peale's dolphins can often be seen from the beach, playing in the surf.

All content from Kiddle encyclopedia articles (including the article images and facts) can be freely used under Attribution-ShareAlike license, unless stated otherwise. Cite this article:
Bertha's Beach Important Bird Area Facts for Kids. Kiddle Encyclopedia.