Bessie Pease Gutmann (1876 – 1960) was an American artist and illustrator, most noted for her paintings of putti, infants, and young children. During the early 1900s she was one of the better-known magazine and book illustrators in the United States. Her artwork was featured on 22 magazine covers such as Woman's Home Companion and McCall's between 1906 and 1920. She also illustrated popular children's books including a notable 1907 edition of Alice's Adventures in Wonderland. Although the commercial popularity of Gutmann's art declined during World War II, there was renewed interest in her illustrations from collectors by the late 20th century. 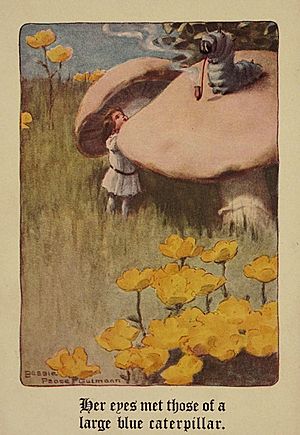 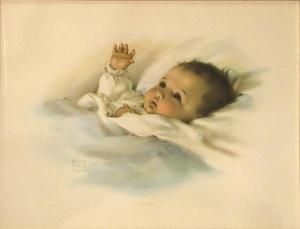 Gutmann was born Bessie Collins Pease on April 8, 1876, in Philadelphia, Pennsylvania, the daughter of Horace Collins. After graduating from high school, she studied at the Philadelphia School of Design for Women. From 1896 to 1898, she attended the New York School of Art (later Parsons, The New School), and attended Art Students League of New York from 1899 to 1901.

Gutmann initially worked as an independent commercial artist drawing portraits and newspapers advertisements. In 1903, she gained employment with the publishing firm of Gutmann & Gutmann which specialized in fine art prints. The first children's book she illustrated was a 1905 edition of A Child's Garden of Verses by Robert Louis Stevenson. Gutmann illustrated several more books including a notable 1907 version of Lewis Carroll's Alice's Adventures in Wonderland. She also created artwork for postcards and calendars, and her art adorned 22 magazine covers for McCall's, Collier's, Woman's Home Companion, and Pictorial Review, among others. Her greatest recognition came from a series of hand-colored prints which highlighted the innocence of young children. Two of her most notable works were A Little Bit of Heaven and The Awakening which both focused on the face and hands of an infant tucked under a blanket. Gutmann's work was popular through the 1920s but interest in her style declined before World War II. Due to failing eyesight, she retired from drawing in 1947.

In 1906 Gutmann married Hellmuth Gutmann, one of the brothers who co-owned the publishing firm where she was employed. The couple moved to South Orange, New Jersey (378 West End Road) in 1909. Thereafter, they had three children, Alice, Lucille, and John, who became the models for her illustrations.

All content from Kiddle encyclopedia articles (including the article images and facts) can be freely used under Attribution-ShareAlike license, unless stated otherwise. Cite this article:
Bessie Pease Gutmann Facts for Kids. Kiddle Encyclopedia.