The Betts House, built in 1804, is the oldest surviving building in Cincinnati and the oldest brick home in Ohio. This remarkable survivor of Cincinnati's period of settlement offers exhibits and programs that focus on Cincinnati history, historic preservation, and the built environment. In addition to be being a house museum, the Betts House is also the headquarters of The National Society of the Colonial Dames of America in the State of Ohio.

History of the Betts House

The Saga of the Betts Family

The Betts House, constructed in 1804, is the oldest brick home in Ohio and the oldest remaining residential structure in downtown Cincinnati. Originally situated on 111 acres, the home was once at the heart of a prosperous farm and brick yard. Over time, the idyllic country landscape surrounding the home transitioned to an urban environment as the city expanded. Today, the Betts House is a central structure in the Betts-Longworth Historic District in Cincinnati's West End neighborhood. 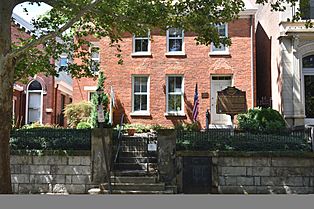 In 1795, the home's original owners, William and Phebe Betts left their home in Rahway, New Jersey to pursue better opportunities in the west. The first leg of their journey ended in Brownsville, Pennsylvania where the Betts lived for a number of years. In 1800, the family decided to resume their push westward on a flatboat travelling down the Ohio River. Upon arriving in the region, the Betts family attempted to obtain a plot of land in Lebanon; however, the deed proved to be faulty. They then struck out for Cincinnati. There William Betts obtained a 111-acre plot of land as repayment for a debt owed to him by a local tavern keeper. Construction quickly commenced on a modest, two-room Federal period farmhouse that was completed in 1804.

Over the following decades, four generations of Betts family members called the Betts House home and raise over two dozen children within its walls. To accommodate the growing family, a number of changes had to be made to the original structure. Between 1804 and 1864, the house more than doubled in size. During this period of expansion, the city of Cincinnati was also growing at an exponential rate. What had once been quiet farmland quickly became an urban neighborhood.

In 1833, the original 111-acre plot was subdivided when William's youngest daughter Eliza turned 21- as stipulated by his will in 1815. During this period, the surrounding area experienced rapid development. By 1839, the neighborhood was incorporated by the city of Cincinnati. Expansion continued at an explosive rate until nearly every plot of land was developed in the West End, and the population soared to an impressive density of 30,000 people per square mile. By the 1870s, the neighborhood had become overcrowded and aromatic due to its close proximity to the meat packing industry at Mill Creek. Many of the affluent residents, including the last of the Betts descendants, moved to the more fashionable hilltop suburbs, such as College Hill, during the following decades. 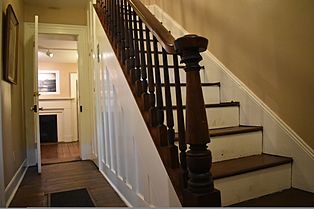 The once densely populated West End suffered immensely from depopulation; however, it was not long before African Americans began to migrate to the neighborhood. By the beginning of the 20th-century, the area had become the cultural center for African Americans in Cincinnati and was a major source of nightlife entertainment. The famous Cotton Club, a jazz establishment, called the vibrant neighborhood home. Unfortunately, the prosperity did not last for long.

By the 1950s, the city of Cincinnati was struggling as the population once again flocked to nearby suburbs. In an effort to revitalize the downtown area, the City Council devised a plan centered on highway construction. The Kenyon-Barr neighborhood, home to around 25,000 low-income people, was selected for the construction of I-75. Between the late 1950s and early 1960s, almost 1,000 structures were demolished in the name of “urban renewal” leaving many of the neighborhood's African American residents without a place to call home.

In the decades that followed, the West End fell into a state of decay. Many of its once stately homes, including the Betts House, lay vacant for much of the 1970s and 1980s when visions of a bustling Queensgate failed to come to fruition.

In 1988, Martha Tuttle, a descendant of William Betts, created a coalition of concerned citizens in an effort to save her ancestral home. Thankfully, in 1990, they were able to secure the home and undertook a costly renovation to restore the property to livable condition. For several years following the renovation, the Betts House served as a small apartment complex.

The National Society of Colonial Dames of America in the State of Ohio (NSCDA-OH) became the sole owners of the property in 1994. In 1996, the Betts House was opened to the public as a historic house museum with exhibits and programs focused on the built environment and early Cincinnati history. The home also serves as the headquarters for the NSCDA-OH.

Cincinnati, a Guide to the Queen City and Its Neighbors, American Guide Series, The Weisen-Hart Press, May 1943, page 228.

All content from Kiddle encyclopedia articles (including the article images and facts) can be freely used under Attribution-ShareAlike license, unless stated otherwise. Cite this article:
Betts House (Cincinnati, Ohio) Facts for Kids. Kiddle Encyclopedia.