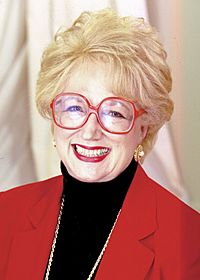 Betty L. Siegel (January 24, 1931 – February 11, 2020) was an American author and educator. He was president of Kennesaw State University. She was the first female president of the University System of Georgia. She was in that position for 25 years, making her the longest serving female president of a state university in the United States from 1981 to 2006. Siegel was born in Cumberland, Kentucky.

All content from Kiddle encyclopedia articles (including the article images and facts) can be freely used under Attribution-ShareAlike license, unless stated otherwise. Cite this article:
Betty Siegel Facts for Kids. Kiddle Encyclopedia.