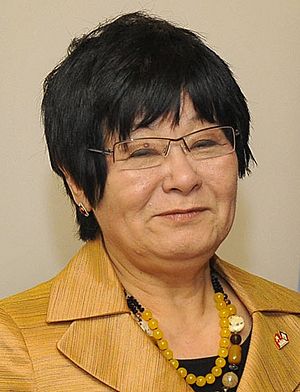 Beverley Joan "Bev" Oda, PC, MP (born July 27, 1944) is a Canadian teacher, television broadcaster and politician. She was the first Japanese-Canadian member of the House of Commons of Canada.

Oda was born in Thunder Bay, Ontario. She was the daughter of Japanese Canadian parents. She was a Sansei, which means that she was the granddaughter of people born in Japan who immigrated to Canada.

Oda earned a degree from the University of Toronto.

Oda was the first Japanese-Canadian to be appointed a Cabinet Minister. She was a member of the Queen's Privy Council for Canada.

All content from Kiddle encyclopedia articles (including the article images and facts) can be freely used under Attribution-ShareAlike license, unless stated otherwise. Cite this article:
Bev Oda Facts for Kids. Kiddle Encyclopedia.