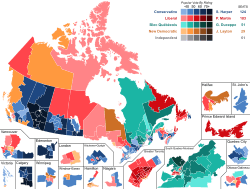 Map of the ridings and their popular vote

The 2006 Canadian federal election (more formally, the 39th General Election) was held on January 23, 2006, to elect members of the House of Commons of Canada of the 39th Parliament of Canada.

Official candidate nominations closed January 2, 2006. Candidate totals cited above are based on official filings. Nominations were official on January 5, 2006.
"% change" refers to change from previous election
* indicates the party did not contest in the previous election.
1 André Arthur was elected as an independent candidate in the Quebec City-area riding of Portneuf—Jacques-Cartier. He personally won 20,158 votes. 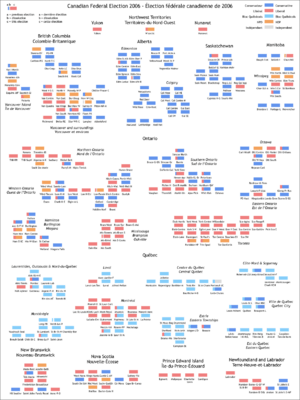 André Arthur was elected as an independent candidate in the Quebec riding of Portneuf—Jacques-Cartier.

All content from Kiddle encyclopedia articles (including the article images and facts) can be freely used under Attribution-ShareAlike license, unless stated otherwise. Cite this article:
2006 Canadian federal election Facts for Kids. Kiddle Encyclopedia.